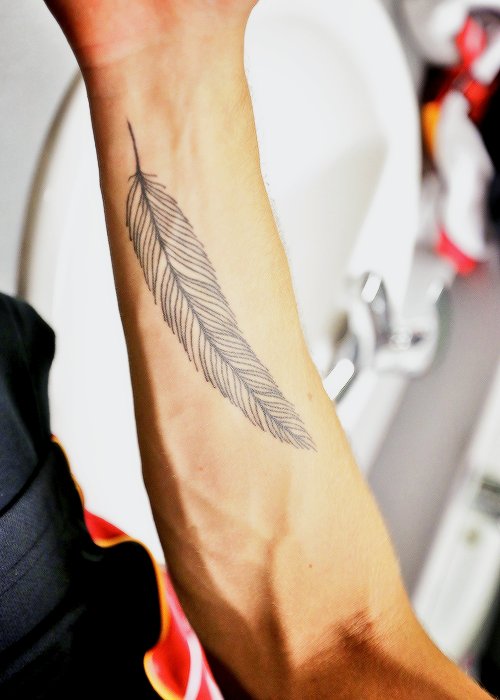 According to Liam Payne himself, his poor mother isn’t too fond of his growing collection of tattoos, but there is one piece she does approve of: the large feather tat the singer sports on his arm. The prominent tattoo was inked on April 1, 2013, and features a large black and white feather reaching from Liam’s wrist about halfway up the inside of his right forearm. The most common meaning of a feather tattoo is a spiritual connection, namely as a tribute to a lost loved one, and Liam Payne’s tattoo is no exception. Read on to learn the sentimental meaning behind the Liam’s feather tattoo on his arm!

During an interview with ABC’s Nightline that aired in August 2013, Liam explains the inspiration behind his feather tattoo, and we have to say, we are now huge fans of the sentimental 20-year-old! “The feather was a thing, when I was a kid we used to find feathers around the house and whenever we found them my mum used to say it was my nan leaving them around for us to find, so that was quite sweet,” Liam revealed during the interview. Aww! Is it just us, or do you think that Harry Styles and Louis Tomlinson (as inked-up as they are already) could take some tattoo inspiration from Liam?? How sweet!

Just four months after getting the feather tat inked on his arm, Liam debuted a new addition to the meaningful piece: the phrase “I figured it out…” inked in a small black script below the top part of the feather. Apparently, the words are actually lyrics from an upcoming One Direction song, and Liam may have inadvertently let that little tidbit slip during the ABC interview! Based on its placement though, it looks like Liam’s “I figured it out…” tattoo may actually tie into the feather tat he got inked in memory of his nan. Perhaps Liam “figured out” where the feathers were really coming from? Guess we’ll have to wait until that new track comes out!

As we write about Liam Payne’s tattoos and all these other young pop star tats, we can’t help but wonder what their parents think of their ink. Demi Lovato recently revealed that she got into a huge argument with her mother over the birds in flight tattoo on her arm, and the singer ended up storming out of her house. Well, Liam’s mother apparently has similar feelings about her son’s ink. “My mum hates tattoos but she likes this one, because this one is specifically to do with my nan,” Liam said about the feather tat. “That was actually the one that turned her around to tattoos and she was OK with it.” In fact, Liam says his mom may consider getting her own tattoo soon!