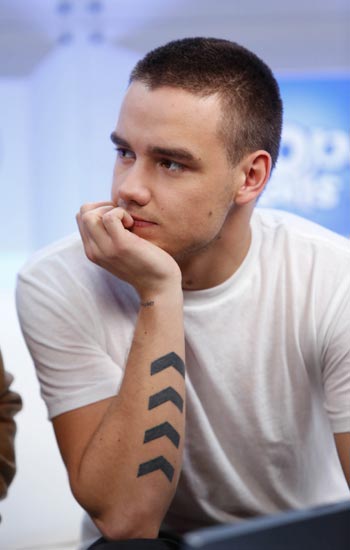 One of Liam Payne’s most prominent tattoos is the bold chevron tat he sports on the outside of his right forearm. The large piece features four identical black filled-in arrows arranged in a chevron pattern, with the tips of the arrows pointing up towards Liam’s wrist. The One Direction singer’s arm tattoo was inked on November 7, 2012, and was first revealed during a live performance on The X Factor the following evening. Since One Direction first got together, Liam has been known as the shy and cute one of the group, but now he appears to be moving away from that image and following in the footsteps of his inked-up bandmates Harry Styles, Louis Tomlinson and Zayn Malik instead. What a rebel!

The chevron design is an inverted V-shaped pattern that has historically been used in badges or insignias on military or police uniforms as an indication of rank or length of service. We doubt Liam meant his arm tattoo as a military symbol, but the chevron image has also been used on the uniforms of a number of European football (soccer) clubs, including the UK’s Manchester United, France’s FC Girondins de Bordeaux and Australia’s Melbourne Victory FC. Liam and his One Direction buddies have proven time and time again that they are huge soccer fans – some of them played before they hit it big and Louis Tomlinson recently bought his hometown team – so it’s possible that the pop star’s chevron tattoo symbolizes his devotion to a certain football club.

Many people have come to believe that Liam Payne’s tattoo of the chevrons is a tribute to his One Direction buddies: “Okay, this is what I’ve been thinking @Real_Liam_Payne’s new tattoo has 5 arrows. In 1D there’s 5 boys. And they’re all going in @ONEDIRECTION,” wrote one fan. While it would be creative and awesome if that’s what Liam’s tat stood for, we’d like to point out that there are only four chevrons in the arm tat, not five. It is possible though, that the arrows represent each of his bandmates – Zayn, Harry, Louis and Niall – just not Liam himself. The pop star did say during an interview the month before he got the chevron tat: “all I ever need is my family and these four boys right here” in reference to his “Everything I wanted…” arm tattoo. We could be on to something here!