**Update: Thanks to a shirtless gym selfie Liam posted to his Instagram account, we now know that the tattoo on his upper arm features a lion crest topped by a helm from a medieval knight.

The internet has been in an uproar today over a new tattoo that appears to belong to One Direction’s Liam Payne, possibly as part of a growing tattoo sleeve he began work on just a few months ago. The tattoo in question was done by Nikko Hurtado of the Black Anchor Collective in Hesperia, California, and features an intricate, almost-3D-like design of a crest portraying a lion standing on its hind legs, paws in the air, and some scrollwork extending out from the crest. Nikko posted a photo of the in-progress tattoo sleeve on Instagram over the weekend, and while he didn’t mention Liam in the caption, the majority vote appears to be that the ink belongs to the 22-year-old.

In the Instagram photo Nikko Hurtado posted online, he included the caption: “In progress! More to come. Very excited about this sleeve. @blackanchorcollective @blackanchorbynikko @stencilanchored.” It seems some eagle-eyed fans recognized Liam Payne’s bicep in the photo or something, because rumors immediately began circulating about the pop star’s potential new ink, which does appear to match the tattoo of a large clock and gears Liam debuted back in March. Nikko was also responsible for Liam’s clock and gears tattoo, and admitted at that time that he had no idea who the singer was until “after his daughter flipped out about it.”

When he revealed the intricate clock and gears artwork on Liam’s arm back in March, Nikko noted that he had “started something new” on the pop star’s forearm, which does make it seem likely that Liam went back to Nikko for an addition to the sleeve – this new lion and crest piece. In addition to the photo of this possible new Liam Payne tattoo, Nikko also posted a video of the piece in progress, along with the caption: “I am truly grateful for the blessings I have received through hard work and dedication to my craft. I absolutely love art and tattooing makes me feel alive and centered.” 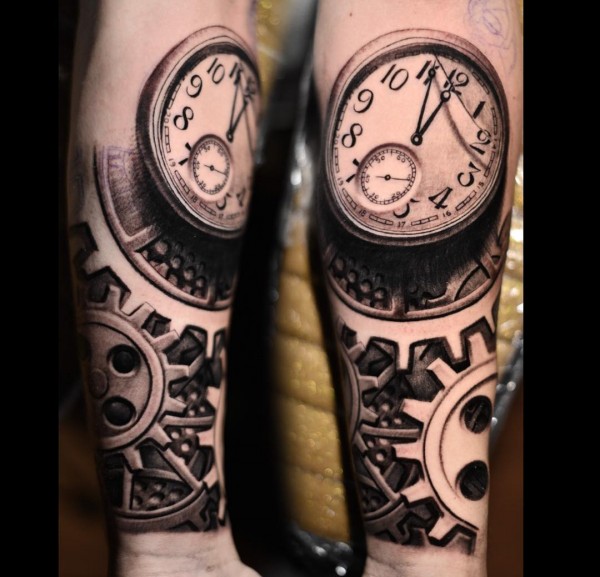 As for the meaning behind Liam’s new tattoo, we did some digging into the pop star’s background, and it turns out, the artwork is very similar to the Payne family crest or coat of arms, which features two lions, each with a paw in the air. Above the crest is the phrase “Malo mori quam foedari,” which translates to “Death rather than disgrace.” Pretty badass, huh?? Plus, the impressive, 3D-like design of this new piece fits nicely with the clock and gears tattoo Liam got earlier this year, so our guess is, the ink is definitely Liam’s.

What do you all think, does this new lion crest tattoo belong to Liam Payne? If so, will the completed piece end up being a tribute to his family and heritage? Let us know what you think in the comments section below!