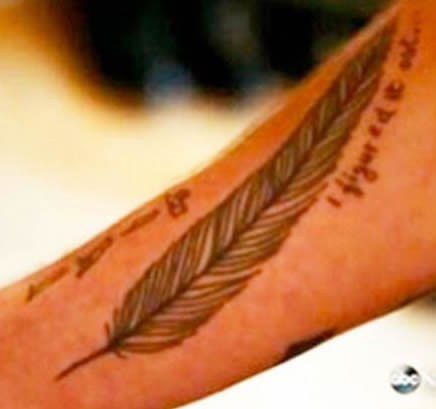 Update: Liam Payne’s “I figured it out…” tattoo on his arm features lyrics from One Direction’s “You & I” track, which is off the band’s 2013 Midnight Memories album. The song goes: “I figured it out / Saw the mistakes of up and down / Meet in the middle / There’s always room for common ground.”

Liam Payne isn’t about to let Harry Styles, Zayn Malik and Louis Tomlinson get all the tattoo attention; the One Direction band member finally revealed the mysterious tattoo he got inked on his arm back in June, and the meaning of the tat is super sweet. Liam Payne’s tattoo was inked during the same session as Zayn Malik’s Perrie Edwards tat, and was finally revealed on ABC’s Nightline on August 26, 2013. The tat features the words “I figured it out” in a simple black font, inked in a curve beneath the feather tat the singer already had on his arm. Liam’s “I figured it out” arm tattoo is cool for two reasons: first, the phrase is actually lyrics from an upcoming One Direction song, so we get a little sneak peek at what the boys have been working on in that sense; and two, the phrase plays into the meaning of the feather tattoo, which Liam had inked as a tribute to his beloved nan.

In revealing the new addition to his tattoo collection, Liam explained that the underlying meaning of the tattoo is what really matters. “It’s not so much what it says, that’s actually some of the new words from one of our songs that’s not out yet,” Liam said about his “I figured it out” tattoo. “That’s a big exclusive, that’s actually one from the start of the songs, so that’ll come to play later on.” Similar to Harry Styles’ mom, it appears Mrs. Payne isn’t terribly fond of Liam’s ink, unless it has a truly important meaning, which the feather tat does. “My mum hates tattoos but she likes this one, because this one is specifically to do with my nan,” Liam said in reference to his arm tattoo. “That was actually the one that turned her around to tattoos and she was OK with it.” So why was Liam’s mother okay with the feather tattoo? “The feather was a thing, when I was a kid we used to find feathers around the house and whenever we found them my mum used to say it was my nan leaving them around for us, so that was quite sweet.”

Liam Going Tat for Tat With His Bandmates

With Harry Styles’ tattoos nearing 50 and Zayn Malik and Louis Tomlinson not too far behind, Liam has a lot of catching up to do if he hopes to hang with the other inked-up One Direction boys. It appears that Liam can hold his own though; the singer already has quite a few tattoos scattered across his body, and (thankfully), he doesn’t seem to favor the tiny random doodles like Harry and Louis. Among Liam’s other tattoos are four large chevron designs inked on the outside of his right forearm, the phrase “Everything I Wanted But Nothing I’ll Ever Need,” on the outside of his left arm, screw tattoos on his ankles to keep him grounded, and the phrase “only time will tell” on his wrist. As One Direction puts out hit after hit, Liam and the boys continue to immortalize their tracks in tattoos like Liam’s “I figured it out” tat and Louis Tomlinson’s tattoo of a teacup. We doubt Liam’s latest arm tattoo is the last One Direction tribute tat we’ll see!

One Response to: Liam Payne Shows Off Sweet “I Figured it Out” Tat on His Arm