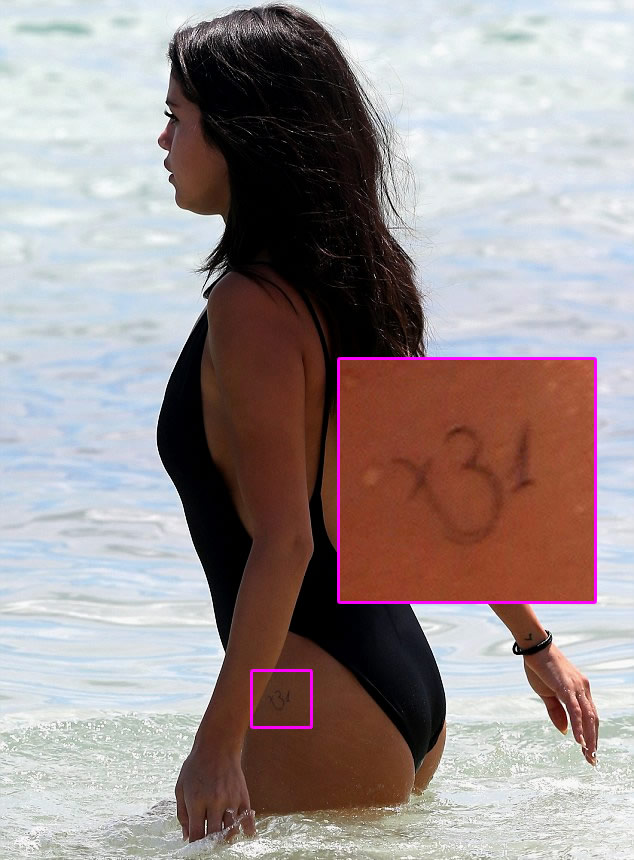 New photos of Selena Gomez frolicking in the Miami surf emerged online over the weekend, and if you can tear your eyes away from the 23-year-old’s smoking hot bod for a moment, you’ll notice that she is rocking a tiny new tattoo on her left hip! Selena Gomez’s new tattoo is inked on the outside of her left hip, just above her upper thigh, and features a small inking of the sacred Om symbol, which holds a great amount of significance in Hinduism. The Hindu tat is inked in black and appears, in Selena Gomez’s case, as a small letter “x,” followed by the number 3 and the number 1. While Selena Gomez was raised Catholic, and has always been open about her religious beliefs, the singer also rocks a tattoo on her back that translates to “love yourself first” in Arabic, so it’s not terribly surprising that she opted for an Om symbol for tattoo number five.

In Hinduism, Om is a spiritual symbol referring to Atman (soul, self within) and Brahman (truth, divine, ultimate reality, entirety of the universe, cosmic principles, knowledge, supreme spirit), and the written form of the syllable is considered to be one of the most important religious symbols. According to Hindu belief, the “Om” is capable of clearing the mind of thoughts and distractions when chanted, which might come in handy for Selena, who is in the midst of releasing her new album, Revival, and tweeted on September 19 that she had “major anxiety” at the airport in Miami. Selena was reportedly en route to London, where she attended the Louis Vuitton Series 3 Exhibition Launch during the city’s fashion week.

Selena Gomez isn’t the first pop star to get a spiritual Om tattoo, and she won’t be the last. Miley Cyrus has an Om symbol tattooed on her wrist, and other celebrities with Om tattoos include Vanessa Hudgens, Ashley Greene and Alyssa Milano. It’s not clear yet when Selena Gomez actually got her Hindu Om tattoo, but the 23-year-old has been known to rock tattoos for long periods of time before putting them on display in public, like her sexy “God strengthens me” hip tattoo, and her new Om tattoo is inked in a spot where it would normally be covered by her underwear or bikini bottoms. However, thanks to the on-trend high-leg, one-piece bathing suit the singer and actress was rocking in Miami, we were able to catch a glimpse of Selena Gomez’s new Hindu tattoo!