The general consensus when it comes to Justin Bieber’s new face tattoo is that the pop star took his obsession with ink a little too far, and should stop trying to be like Lil Wayne. And according to recent reports, Selena Gomez is on board with the Bieber bashing, saying that the 22-year-old needs to “control his impulses.” Okay, so Justin Bieber may have missed the mark with this latest tattoo, but what does that mean for his relationship with on-again, off-again girlfriend, Selena Gomez?

According to one source, “Selena is not happy about Justin’s new face tattoo.” She really dislikes “the placement of the ink,” and wants the Biebs to get it removed. Wondering why Selena feels so strongly about Justin Bieber’s tattoo? Apparently, it’s because it reminds her of how reckless the singer can be. “Selena feels like this is another example of Justin acting impulsively, which is part of the reason why their relationship has been so rocky over the years. She wishes he could just control his impulses and things would be much easier for both of them.” 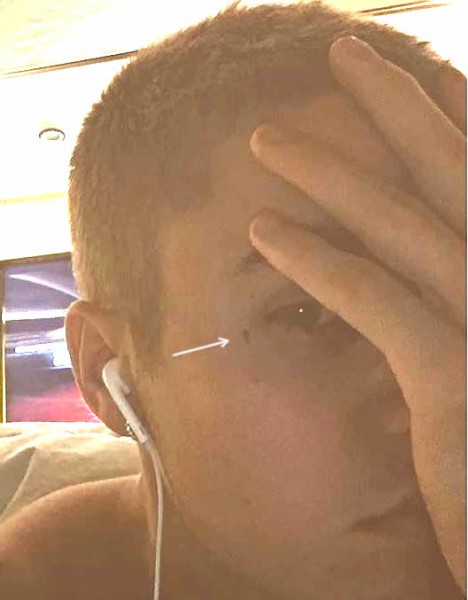 It does seem like the tiny cross tattoo on Justin’s face was an impulsive decision, especially because the pop star said earlier this year that he would consider getting a tattoo on his face, but not until he was older. “Maybe when I’m really old, not super old, but maybe like 40s or 50s or something,” Justin said during an interview with GQ magazine. “One above my eyebrow or something small. I think if they’re done right, [face tattoos] could be cool, but nothing super crazy all over the face.”

Okay, so maybe he’s not trying to be like Lil Wayne, whose tattoos are the definition of “super crazy all over the face,” but getting a tattoo below his eye was definitely a big step for Justin, who has, until now, kept all of his ink in the neck region and below. We should have known that when Justin revealed the “patience” and angel wings tattoos on his neck, that it was only a matter of time before he graduated to a face tattoo.

Although the placement of Justin’s new tattoo is definitely questionable, the meaning behind the ink stays true to his beliefs. According to JonBoy, the tattoo artist responsible for inking Justin’s face tattoo, the tiny cross “represents his journey in finding purpose with God.” What do you all think of Justin Bieber’s cross tattoo on his face??

2 Responses to: Selena Gomez Doesn’t like Justin’s New Face Tattoo – Says He Should “Control His Impulses”