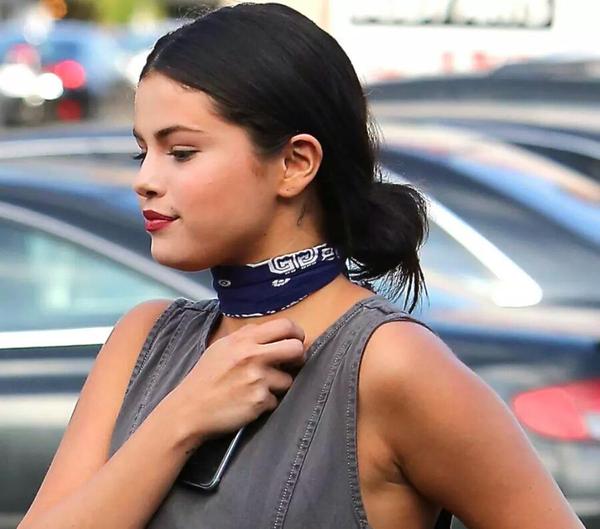 **Update: Selena revealed during an October 2015 interview that her behind-the-ear “g” neck tattoo is, in fact, a tribute to her baby sister, Gracie.

While heading out for a Jamba Juice fix in L.A. earlier this month, Selena Gomez inadvertently showed off a new tattoo that she has somehow managed to keep on the down-low: a single initial inked in a black script font behind her left ear. No word yet on when Selena actually had this new tattoo done, but the singer is notorious for successfully keeping discreet tattoos under wraps, one time being spotted with a “new” hip tattoo that turned out to be over a year old! The same day as her Jamba Juice run, the 22-year-old took to Instagram to “claim her own name,” slamming “them fools” who have spread lies about her online and tried to tear her down in the past. All in a day’s work for Selena!

It was on June 4 that Selena Gomez stepped out in a cute Free People cutout jumpsuit, her hair pulled back and a blue handkerchief around her neck, which just missed covering up the discreet tattoo the singer has inked on the left side of her neck. Some people are claiming that Selena Gomez’s tattoo is a lower-case “g,” much like the inspirational tattoo Hailey Baldwin just had inked in the exact same spot, in honor of Seattle Megachurch pastor Chad Veach’s daughter Georgia, who was born with a rare brain disorder called Lissencephaly, and whose story has touched the hearts of many celebrities. If you ask us though, Selena’s initial tattoo looks more like a capital letter “J,” than a lower-case “g,” which leads us to believe that the ink may actually be a tribute to Jesus. 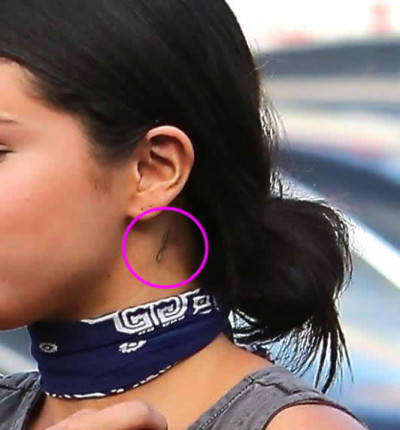 Selena Gomez has always been open about her faith in the past, and she feels strongly enough about her religious beliefs to have been inked in their honor at least once before. In October 2013, while lounging poolside with some friends in Florida, the singer debuted a never-before-seen tattoo reading “God strengthens me” in a vertical line down her right hip. When explaining the inspiration behind her hip tattoo, Selena quoted her favorite Bible passage: “I can do all things through Christ who strengthens me.” So, we wouldn’t be surprised if Selena Gomez added another religious tattoo to her repertoire (and we would much prefer to believe that the singer’s “J” tattoo is a reference to Jesus and not Justin Bieber, as some people are claiming…)

Whatever its meaning, Selena Gomez’s tattoo must be something that she holds close to her heart, because she has yet to officially reveal it on social media! Let us know what you think of the singer’s new ink in the comments section below!