In the aftermath of Blac Chyna’s very public breakup with former fiancé Rob Kardashian, the model quickly moved on to a new relationship with rapper Mechie, who has already proven his love for Chyna by getting a tattoo of her initials behind his ear. In a video that has since been deleted from Blac Chyna’s Instagram account, the 29-year-old cozies up to Mechie while he kisses her on the forehead. Chyna captioned the video clip “BC,” and in it, you can see the fresh ink behind the rapper’s right ear.

Blac Chyna and Rob Kardashian welcomed baby Dream into the world back in November and the two seemed happier than ever. But just eight months later, rumors started circulating about a possible cheating scandal, and their relationship immediately blew up, and in the worst possible way. Rob took to social media to slut-shame his ex and the mother of his child, posting nude photos of her without her consent, to which Chyna responded by claiming she was abused by Rob and couldn’t do anything about it because of his Kardashian name.

Since the whole thing went down and Rob posted the nude photos of Blac Chyna online, the model has taken out a restraining order on him, and in an interview with People this week, she talked about her beef with the 30-year-old, saying, “Words are words. But once you start posting actual pictures, that’s just not right. What he did is not right, it’s actually against the law. I just want to voice my story – voice what’s real – because at the end of the day, the person next to me could possibly be going through the same thing.” For the record, Chyna has also threated to sue rapper Ferrari – whom she has also been linked to as this whole drama unfolds – if he decides to pull a Rob Kardashian and share photos of her “unclothed or partially unclothed” on social media. 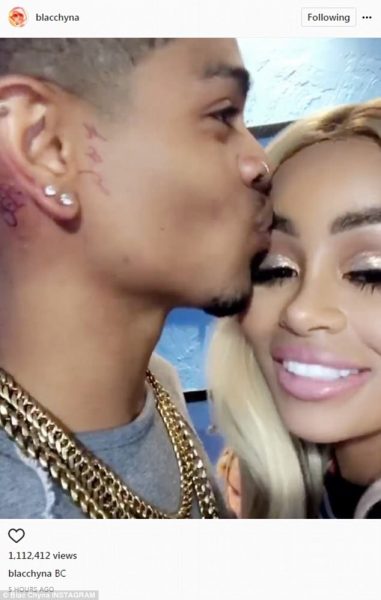 So, if you’re wondering how the freshly-inked Mechie fits into the ongoing Blac Chyna/Rob Kardashian drama, the rapper is the man Chyna was kissing in the video she allegedly sent Rob in early July, prior to the whole nude photo-slut-shaming fiasco. Rob posted the video on social media and wrote in the caption, “So this is the dude she sent me the video of them f**king @mechiesocrazy lol so she f**ked me then @ferraritru3 [rapper Ferrari] then this dude in 3 days. With my daughter and her son in the house in my bed haha and my paid house.”

We can’t imagine that Blac Chyna and Mechie’s new relationship will withstand the disaster that is the model’s life at the moment. If it doesn’t, Mechie will have to come up with a new meaning for his new “BC” behind-the-ear tattoo.