Former Ruff Ryder Eve’s most infamous tattoos may be the sexy paw prints on her chest, but the 34-year-old has a couple of tats that probably stick out in her mind even more – one terrible tat of a person’s name and one with an error that she calls “hilarious.” Even though the singer eventually had both of these tattoos covered up, she still says she doesn’t regret getting them. “You can’t regret decisions you make. You were in a certain place at a certain time and it’s okay, it was meant for you at that moment, and it tells the story of you.” We have to admit, this is a pretty good attitude to take when it comes to bad tattoos, but she still had them covered up, so she regretted them at least a little bit, right?

The tattoo of a person’s name that Eve had covered up was a heart with the words “Sleazy’s Girl,” which referred to Eve’s ex-boyfriend, music producer Stevie J, whose nickname was, unfortunately, “Sleazy.” Today, where that tattoo used to be is a beautiful red peony, Eve’s favorite flower, inked on her right wrist. The other tattoo Eve had covered up was on her left arm. “It actually says ‘Evil Eve,’ and for months I thought it said ‘tiger,’ until I went to Japan and found out it said ‘evil.’” According to Eve though, even a tattoo mistake tells a story. “They all still have meaning – even when I’ve had to cover one up. I’ve only had to do that twice. But they each tell a story. I’ve gotten my tattoos in different countries that I love – so it’s like a map. A scrapbook.” 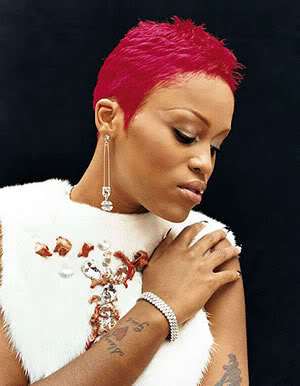 Today, Eve sports quite a few tattoos, including a spider on her left shoulder, the peony on her right wrist, a flower on the back of her right shoulder, and the paw prints on her breasts. Her first came at the age of 17, when she headed to the tattoo parlor intending to get Chinese characters of the four seasons. However, Eve says, “it hurt so bad I only got one. So I got Winter. I tried to make it make sense, like I was born in the winter…it was stupid.” When she turned 18, Eve got her signature paw prints tattoo on her chest, and the location was chosen based on a dare from a friend. “She was like, ‘I dare you to get them on your breasts.’” Although Eve initially dismissed the idea, she ended up going through with it, and, why not? “Now it’s a thing, now that’s how people recognize me,” she says.

Eve Planning to Get a Bob Marley Tat

Eve is obviously a big fan of getting inked, and all of her tattoos, covered up or not, mean something important to the singer. “I just think it’s a form of expression, just like going in the studio, writing a song,” says Eve about getting inked. “I think a lot of tattoos tell a story about where you’ve been or where you’re going or something maybe just inspired you.” 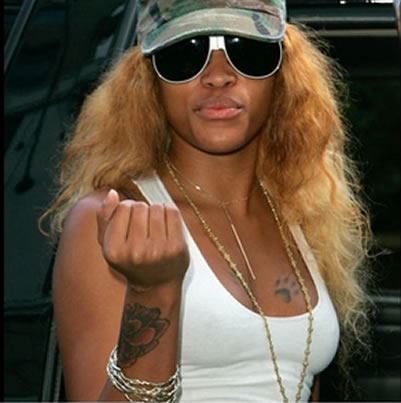 So, is she through with tattoos now that she had those two mistakes covered up? Apparently not! According to Eve, her next piece “will probably be three little birds, which is my favorite Bob Marley song, with the words ‘Every little thing gonna be all right.” And she still isn’t against getting a tattoo of man’s name, despite the “Sleazy’s Girl” fiasco. “I’m with a new man – I would absolutely do it,” she says. “I’m trying to keep this one.”

2 Responses to: A Story of Tattoo Mistakes: Old School Rapper Eve Opens Up About Her Tats