Dame Helen Mirren’s floor-length purple gown and collarbone tattoo of Prince’s iconic symbol stole the show at the annual White House Correspondents’ Dinner on Saturday night, and while the purple tattoo wasn’t real – Mirren admitted that she drew it on herself earlier in the day – it was still a touching tribute to the late singer. With her husband, director Taylor Hackford, on her arm, Helen Mirren held her own alongside countless other Hollywood and political figures, like Joe Biden, John Kerry and Emma Watson, and her moving collarbone tattoo made her stand out from the crowd.

Helen Mirren explained her decision to wear the iconic symbol on her collarbone to a Washington Post reporter, saying, “I admire great artists and he was a great artist.” And while the symbol was only drawn on in purple pen or marker, the actress said she wished the symbol was inked on her body for real. “I’d love to say that Prince himself did it in 1988 or something, instead of me in the bathroom this morning,” she told the Washington Post.

If you don’t know the story behind Prince’s unpronounceable symbol, it all started in 1993, when a contract dispute forced the rock legend to change his legal name, and he chose the curious mark to take the place of “Prince.” At that time, the media began referring to him as “The Artist Formerly Known as Prince,” which lasted until 2000, when the disputed contract was up and he changed his name back. Known simply as “Prince” up until his death, the artist achieved legend status with the 1984 release of Purple Rain, which was considered by Rolling Stone to be the 76th greatest album of all time. 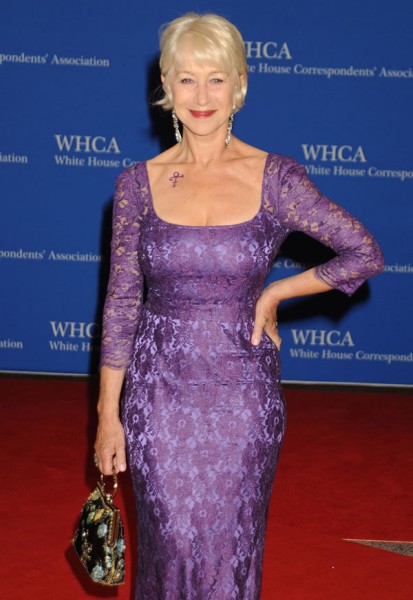 It was on April 21, at the age of 57, that Prince passed away suddenly at his Minnesota home, and his death has been mourned by fans and fellow artists around the world in the weeks since. According to reports, the cause of Prince’s death remains unknown, but there have been plenty of theories circling the Internet in the aftermath of his passing, including the flu, a supposed addiction to pain medication and a devastating AIDS diagnosis. Whatever the cause of Prince’s death, he will be sorely missed in the music world, and in honor of his tragic death, Helen Mirren wore his iconic purple emblem with pride.