Amid the outpouring of love and grief following the unexpected death of Prince in April, his ex-wife, Mayte Garcia, revealed a new tattoo on her wrist inspired by the iconic singer-songwriter. Inked on the outside of her left wrist, and extending very slightly onto her hand and forearm, Mayte Garcia’s Prince tribute tattoo features a mandala, a geometric design that represents the universe in Buddhist and Hindu symbolism. True to Prince’s style though, Garcia’s wrist tattoo has a little twist, one that will remind her of the singer every time she looks at it.

Despite the fact that Mayte Garcia was only married to Prince for four years, from 1996 to 2000, she was obviously affected by her ex-husband’s death, and decided to go under the needle to pay homage to the late musician. Garcia debuted her new tattoo in Los Angeles earlier this week, at the PETA event honoring Prince’s birthday and the re-release of “Animal Kingdom,” the track he wrote for the organization’s 20th anniversary. 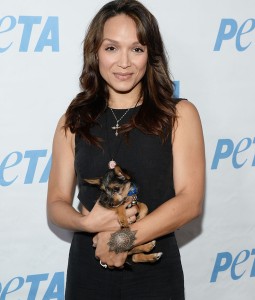 Mayte Garcia was Prince’s first wife, and it was clear after his death that she was grieving the loss of her ex-husband. “This man was my everything, we had a family,” she told People. “I am beyond deeply saddened and devastated [by his death].” Prince and Garcia first met at a concert in Spain in 1990, and the then-16-year-old was brought on as a backup dancer for Prince’s Diamonds and Pearls tour. They got married six years later and, in late 1996, Garcia gave birth to the couple’s first child, Boy Gregory. Sadly, the newborn suffered from a rare genetic disorder called Pfeiffer syndrome, and only lived for a week after being born. “It was very difficult for them,” said one of Prince’s dancers, “and I don’t think they really recovered from that.” 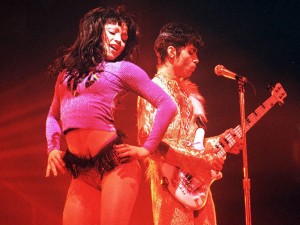 Shortly Boy Gregory’s death, Garcia became pregnant again and miscarried, which took a serious toll on their marriage. “I believe a child dying between a couple either makes you stronger or it doesn’t,” Garcia later told the Mirror. “For me, it was very, very hard to move forward and for us as a couple I think it probably broke us.”

Inspired by a mandala, which represents spirituality and wholeness, Garcia’s wrist tattoo is inked in black and white and features Prince’s iconic male/female symbol at its center. Prince’s ex-wife also posted a video of her tattoo session on Instagram, along with the following caption: “This makes me smile and cry…Love is eternal!! Will remember that every time I look at my hand. To all of you who are hurting…I’m sorry for your pain as well!! But love him for eternity! Thank you @inspired1 for making such a beautiful piece and @luvinflyingcolors for making such a beautiful video! I’m smiling with tears!”