Although many people think Harry Styles’ tattoos are random, there seems to be a common theme among at least some of them. For instance, Harry has some mysterious artwork relating to love and relationships, including his heart tattoo, the “I can’t change” ink on his wrist, and the “Can I Stay?” lyrics tattoo on his arm. Harry also has quite a few tattoos dedicated to his loving mother and sister, Gemma, and to his One Direction buddies as well, particularly Louis. According to tattoo artist Kevin Paul, who has inked many of One Direction’s tattoos, “Everyone’s different, like Zayn’s got microphones and music stuff and, like, Harry has more personal things, like he has little things for his mom and all that kind of stuff.”

Wow, Harry Styles really does love his older sister, Gemma! In addition to the letter “G” tattoo he got inked on his right shoulder, and the iced gem tattoo he sports on the inside of his bicep, the singer also got his sister’s name inked in Hebrew on the upper part of his left arm. Harry Styles’ Hebrew tattoo was reportedly done by Freddy Negrete during a visit to the Shamrock Social Club tattoo parlor in September 2012. Pictures of the tattoo session show Harry hanging out with Glee stars Kevin McHale and Jenna Ushkowitz, and Gossip Girl star Jessica Szohr. You can tell that the Hebrew tat is one of Harry’s earlier tattoos, because in pictures of the ink, the singer doesn’t yet have his ship, star, “Can I Stay?” or city-inspired tattoos. 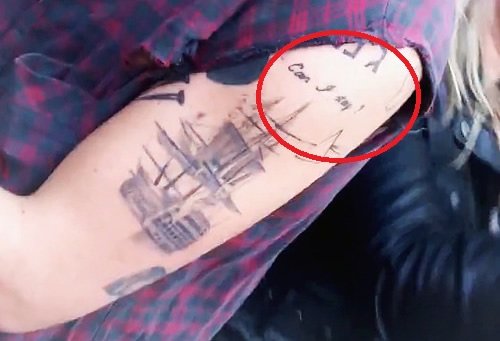 Harry Styles is obviously a fan of random little phrases, like his “I can’t change” and “Might as well” tattoos, and the singer added yet another to his collection in May 2013 – a tattoo on his arm that reads “Can I Stay?” Harry Styles’ “Can I Stay?” tattoo is inked on the upper part of his left arm, just above his giant ship tat and below the Hebrew tat of his sister’s name, and seems to have gone pretty much unnoticed since he got it inked. Because of this, not much is known about the pop star’s arm tattoo, but we did discover that the phrase “Can I Stay” is actually the name of a song by Ray LaMontagne, which goes like this: 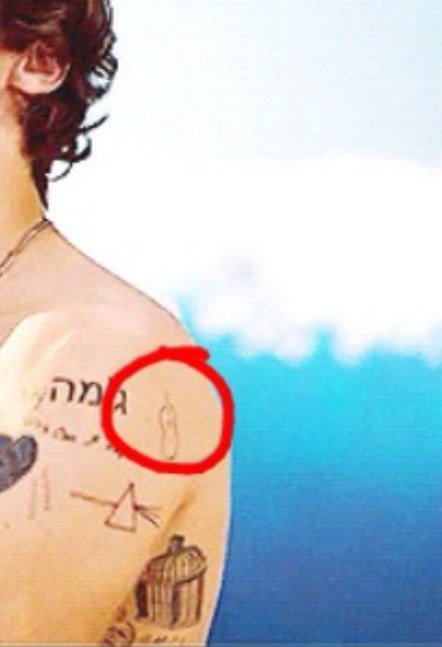 Although it looks an awful lot like a peanut, the very light tattoo Harry Styles’ has inked on the back of his left shoulder is actually a small guitar. Music obviously plays a major role in Harry’s life, and he has been singing since he was a young child, citing Elvis as a major musical influence for him. Back in 2010, Harry auditioned for the X Factor show because he wanted an honest opinion about whether or not he was any good, and the show ultimately created the boy band One Direction. Before the birth of One Direction though, Harry got his start as the lead singer of a band called White Eskimo. Like Selena Gomez, One Direction band mate Zayn Malik, and many other pop stars, Harry Styles probably got the guitar tattoo as a tribute to his musical background. (Truthfully though, we wouldn’t have been surprised even if it was a peanut tattoo, with all Harry’s other random tats).