Tiny tattoos are all the rage these days (think Miley Cyrus’ finger tattoos), and Harry Styles is not one to fall behind on a hot trend. That’s right, 18-year-old Harry Styles is already considered the king of tiny tattoos, and he has five of them inked on the outside of his left wrist alone. Some people think that just because many of Harry Styles’ tattoos are miniature, they don’t have an important meaning to the pop star. Au contraire! Wrist tattoos tend to be more personal and intimate because they are often small and less visible than tattoos located on the arms, chest or back. Read on to learn the meaning behind the padlock, key, shamrock, Aquarius and 99p tattoos Harry has inked on his left wrist!

A tattoo that some One Direction haters have called a handbag or Pop Tart is actually a padlock, and it is inked in a crude design on the outside of Harry’s left wrist, just above where his watch sits. The padlock tattoo is filled in with black ink, and the tiny tat is accompanied by a key tattoo, which is inked to the right and slightly above the padlock. Harry Styles’ padlock tattoo was inked by buddy Ed Sheeran on August 13, 2012 and the first clear photo of the tattoo was posted a couple weeks later while Harry was out celebrating band mate Liam Payne’s birthday.

Adjacent to his padlock tattoo, Harry Styles sports a tiny key tat, which is designed to look like an old-fashioned skeleton key, but also kind of looks like an arrow. Harry’s key tattoo is inked in black and matches a key tattoo that band mate Louis Tomlinson has inked on his right ankle. The matching key tattoos play into rumors that Harry and Louis are secret lovers, which is interesting but probably not true. In fact, many of the One Direction band mates have matching tattoos, including Zayn Malik and Harry’s Pink Floyd prism tats and a tattoo featuring two screws, which nearly all the One Direction guys share. 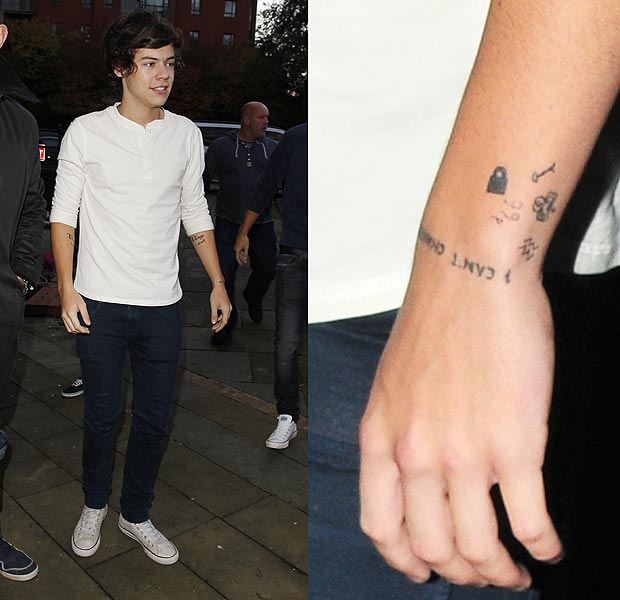 Most people get shamrock tattoos to celebrate their Irish heritage, but not Harry Styles! The shamrock tattoo he has inked on his left wrist is actually a tribute to L.A.’s Shamrock Social Club (SSC) tattoo parlor, where Harry has gotten many of his 40+ tattoos inked. Like most of his tattoos, Harry’s shamrock tat is inked in black and white, and the symbol is located next to his “99p” tattoo and below his skeleton key tattoo. After Harry Styles revealed his shamrock wrist tattoo in September 2012 (which he got on the same day as his Hebrew “Gemma” tat, Freddy Negrete of the SSC tattoo parlor posted online: “1D’s @harrystyles is def fam now. He also got the SSC shamrock tattoo last night and the Hebrew writing.” Leave it to the inked-up Harry Styles to get a tattoo honoring a tattoo parlor…

Just below his shamrock tattoo, Harry Styles has a couple of squiggly lines that look like waves and are actually meant to represent the Aquarius Zodiac sign. Harry was born on February 1, 1994, which makes him an Aquarius – the 11th astrological sign in the Zodiac. The Zodiac symbol for Aquarius is “water carrier” and is represented by two undulating lines of waves as a result of the ancient hieroglyph for water. Aquarius is one of the three signs, along with Gemini and Libra, that belong to the air element, and it is also one of the masculine signs.

The last of the cluster of tiny tattoos Harry Styles has inked on his left wrist is the symbol “99p,” which has sparked considerable debate regarding the tattoo meaning. Being that Harry Styles was born and raised in the UK, it makes sense that the tiny “99p” tattoo inked on the pop star’s wrist would represent 99 pence, a British monetary sign, although there’s no telling what would have inspired Harry to get that price inked on his body. Some people have said that “99p” could also stand for 99 problems, in which case Harry could be referring to Jay-Z’s track of the same name. In the song, Jay-Z raps, “If you’re having girl problems I feel bad for you son / I got 99 problems but a b*tch ain’t one.” Perhaps Harry got this tattoo after breaking up with Taylor Swift or another ex-girlfriend.