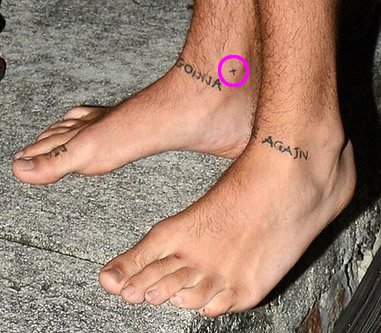 Harry Styles needs to start showing off his ankles more so we can check out his mysterious tattoos! Harry apparently has somewhat symmetrical ink on his left and right ankles, including a screw tat and ankle band on each ankle, the latter of which looks like they could be words, song lyrics or quotes (and you know how Harry Styles likes quotes!) After getting one of his more recent tattoos, a source said about Harry, “Harry is getting really into tattoos – he’s had numerous tatts over the past few months. Some have deep meanings, while he just likes the designs of others.” If we had to take a guess, we’d say that Harry Styles’ ankle tattoos must mean something important to the pop star, since he has pretty much kept them to himself!

In addition to the tattoo of three nails Harry Styles has inked on his left arm, the singer also has a tattoo featuring two screws – one on each ankle. There aren’t many photos of Harry’s screws tattoos, but the ink looks like a small x or + on his ankles and all the One Direction boys sport the same ink. Harry and Zayn were the first to get the screw tattoos (they inked them on each other, in fact) followed by Liam and Louis. Niall was the last of the One Directions to get the screw ink because he is apparently afraid of needles (no wonder why he has managed to stay tattoo-free around all his inked-up buddies!)

Niall wasn’t about to get away with not getting the matching ink though; after Liam and Louis’ tattoo session in October 2012, Louis tweeted: “So Me and Liam joined the crew yesterday and got two screw tattoo’s on our ankles, now we all have it except Niall!” To which Niall responded, “Ok I’ll give into you! I’ll get it done! Jesus! Have ya quite finished? #neglect hahahaha.” 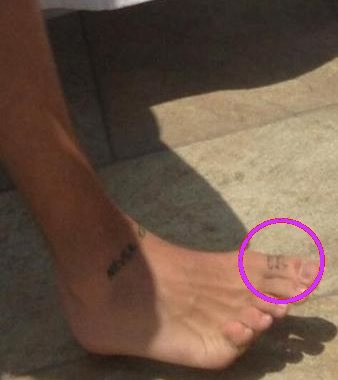 Harry’s ankle tattoos of two screws are obviously meaningful, since all five band members now sport the ink, and the guys say it keeps them grounded.

On the top of the big toe on his right foot, Harry has a tattoo that the One Direction singer managed to hide for quite a while…until now! We finally scored a decent picture of Harry Styles’ tattoo, which is inked in black and white and features a simple crown design – much like Justin Bieber’s crown tattoo on his chest. When the Biebs first got that royal tattoo inked, we figured he was naming himself the prince of pop, so it’s possible that Mr. Styles could be making a similar claim. However, considering the fact that Harry’s crown tat is inked in such a discreet location, he may not be so sure about his pop star status! 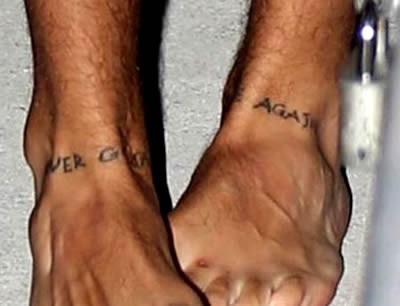 Two of Harry Styles’ most elusive tattoos are the bands of ink the singer sports on his ankles. Fortunately for you all, we have the inside scoop! Harry Styles’ ankle tattoos feature the lyrics “never gonna” on his left ankle and “dance again” on his right ankle, taken from the George Michael song “Careless Whisper.” As the song goes:

I should have known better than to cheat a friend,
And waste the chance that I’d been given.
So I’m never gonna dance again,
The way I danced with you.

Tonight the music seems so loud,
I wish that we could lose the crowd.
Maybe it’s better this way,
Wed hurt each other with the things we want to say. 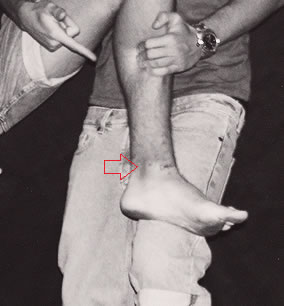 According to reports, Harry Styles got his ankle tattoos inked on August 21, 2012 by his friend Tom Atkin. The following month, Harry appeared on buddy Nick “Grimmy” Grimshaw’s radio show and Grimmy said, “You have this song [Careless Whispers] tattooed on your body, isn’t that correct?” Harry Styles neither confirmed nor denied the “Careless Whispers” tattoo comment, but you can tell by this photo that it’s true!