Looking at Harry Styles now, it is extremely hard to believe that back in 2012, the pop star was completely free of tattoos. Nowadays, the 18-year-old singer sports 40+ tattoos that are scattered across his body, and many people are wondering if the inked-up Harry might actually have a tattoo addiction. It certainly seems that way, considering many of Harry’s tattoos (like his “Hi,” coat hanger and bird cage ink) seem completely random and meaningless. Some of Harry Styles’ more recent tattoos, however, including the swallows he has inked on his chest, have definitive meanings that presumably strike a chord with the singer. Then there are others, like Harry’s covered-up “Love” banner, that obviously did not.

One of Harry Styles’ most prominent – and probably most meaningful – tattoos is the ink he has on his chest, which features two large swallows in flight. Harry’s chest tattoo is inked in black and white, and the swallows are facing one another, which makes it look like they are both headed toward the same destination. According to Harry himself, “[the swallows] symbolise traveling, and we travel a lot.” Harry also said about the chest tat, “I like that kind of style of tattoos, like the old sailor kind of tattoos.” Some of the first swallow tattoos were inked on the chests of sailors after they sailed 5,000 nautical miles, and the birds have also come to be known as a symbol of good luck and arriving home safely. Harry Styles’ swallows chest tattoo was inked in L.A. in November 2012, and the tat gives us all a little glimpse into Harry Styles’ life and how he handles constantly being on the road with One Direction and being away from his home in England. 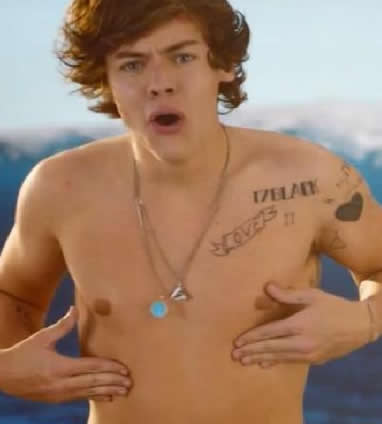 In addition to symbolizing home and traveling, Harry Styles’ swallows tattoo also served another purpose – it covered up the “Love” banner the singer previously had inked on the left side of his chest, over his heart. The covered-up chest tattoo portrayed a simple black and white banner with the word “Love” inked inside. One Direction fans have had a field day with the symbolism of Harry covering up his “Love” banner tattoo, claiming that the move means that he is both literally and figuratively hiding his love. Who exactly this secret love is aimed towards is a mystery to us, but we think there is a less cryptic meaning behind Harry Styles’ covered-up “Love” banner tattoo. Perhaps Harry thought the swallows tattoo served the same or similar purpose as the “Love” banner, but with a less obvious and more interesting design.