It was just one month ago that Jesy Nelson revealed the large black and white roses tattoo on her arm as Little Mix prepared to promote their new album Salute, and the pop star has already added another new tat to the same arm: a pretty bad-ass tattoo of large skull and rose that extends from the middle of her arm up to her elbow, in what looks like the beginnings of a tattoo sleeve. Jesy took to Instagram on January 30, 2014 to show off her new skull and rose ink, and captioned the photo “New tattttt added to the famalam 😀 x.” We have a feeling that if Jesy Nelson refers to her tattoo collection as a family, she is most definitely planning on adding more members to the crew in the future!

Jesy Nelson’s tattoo is located on the outside of her left forearm, and features a grinning skull inked in black and white with an all-seeing eye in the center of the skull’s forehead and a rose that goes in the skull’s mouth and comes out of its left eye socket. The skull and rose tattoo is a little creepy and is quite a bit larger and more foreboding than the pop star’s first two tattoos – the phrase “Music is the strongest form of magic” inked on her bicep and “A tiger never loses sleep over the opinion of sheep” encircling her thigh. As for the possible meaning behind Jesy’s new tattoo, a tat featuring a skull and rose typically symbolizes the parallels between life and death, or beauty and decay, and this meaning seems to apply to her ink.

Beauty is definitely a hot button topic with Jesy Nelson, and the singer has struggled in the past with criticism over her appearance, weight, and even her style. 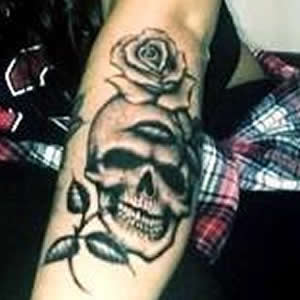 She has been called names like “the chubby one” of the Little Mix group, and it’s possible that Jesy’s new tattoo of the skull and rose is a symbol of the obstacles she has overcome since being thrust into the public eye in 2011. Fortunately for Jesy, she isn’t the last bit insecure about her appearance, and she embraces the fact that she’s not a cookie-cutter pop star like so many others. In fact, she recently posted on Twitter: “I love my tattoos I love my food I love the way I am I love my different kinds of bits…I am me and not changing for any haters :)” We say good for her!