Take one look at hip-hop-meets-country artist Post Malone, and you’d never guess that his tattoo collection was inspired by Justin Bieber. With long, braided hair, a gold grill, a neck and wrist draped in gold chains and watches, and a tattoo collection that rivals Wiz Khalifa’s, Post Malone is a far cry from looking anything like the fairly clean-cut Canadian pop star (at least in his pre-blonde-dreadlock stage). But, according to a recent interview Post Malone gave with GQ magazine, it was actually Justin Bieber who first inspired the artist to get inked.

Post Malone released his first mixtape, August 26, last spring, and he is currently opening for Justin Bieber on his Purpose World Tour, but his relationship with the Canadian pop star started long before Post Malone was performing with him on stage. In fact, it was Justin Bieber who inspired Malone to get his very first tattoo – a large, black and white Playboy bunny on his left forearm that got messed up when the two were shooting hoops together one day, while the ink was still healing. “Justin did apologize [for ruining the tattoo], but he’s gonna have to buy me a new one,” Malone joked in the interview.

“Justin Bieber was the one who inspired me to get tattoos because we [were] in the studio, and I was like, ‘hey man, does that hurt?’” Justin told him no, and the rest is history. “I mean all of these [tattoos], really, are just spur-of-the-moment. I was on the Internet, and I was like, you know what, this is tight. Let’s go.” With everything from tattoos of John Legend to a “Cartier love bangle logo,” to a snake wrapped around an M-16, Post Malone’s tattoo collection is anything but run-of-the-mill.

Ever since getting that first Playboy bunny tattoo, Post Malone has gone back under the needle a dozen or more times, for tattoos inspired by his favorite artists and other important people in his life, and he doesn’t plan to stop anytime soon. In fact, he has plans to cover his entire body in tattoos, beginning with a full sleeve that he’ll get on his right arm once his tattoo artist comes in from Dallas, and, according to Malone, he won’t stop until he gets a tattoo of a claymore sword on his face. 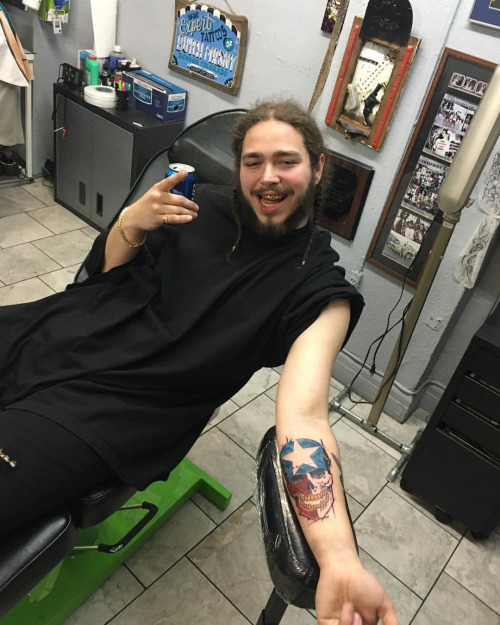 So, Justin Bieber, a pop star who draws inspiration for his tattoos from his music, his family and his religious beliefs, has inspired another artist to get inked. And if you’re wondering if Post Malone has returned the favor and inspired Justin Bieber to get more tattoos, the answer is yes. According to Malone, “We were in the club, and he was talking about getting hand tats. He asked me if he should do it, and I told him, ‘yeah, […] it’s very rock-star-like.’” So, keep an eye out for some new tattoos on Justin Bieber’s hands!

One Response to: Justin Bieber Was the Inspiration for Post Malone’s Tattoo Collection