Katy Perry got her second tattoo – a small red strawberry on the inside of her left ankle – in July 2009, but she actually debuted a fake tattoo on her chest that same day, which totally threw everyone off course. Thankfully, Katy’s provocative “Josh Grobin” (his name is actually spelled Groban) wasn’t real, and the pop star ended up getting her grinning strawberry tat that night at NYC’s East Side Ink, home to one of Rihanna’s favorite tattoo artists. Katie Perry eventually revealed her smiling strawberry tattoo on Twitter, after earlier musings: “Thinking about getting my second tattoo tonight! I wanna get a cartoon-ish strawberry to celebrate this amazeballs past 15 months.” The morning after getting the ankle tattoo, Katy tweeted, “My new little friend…what shall be her name?” Katy Perry’s strawberry tattoo is cute and light-hearted, and it’s not the only whimsical ankle tat the pop star has. Check out the happy peppermint tattoo on her other ankle!

Katy Perry chose the cute smiling strawberry for her second tattoo as a tribute to the success of her first pop album, One of the Boys, which was released in 2008. Throughout her “Hello Katy” world tour, the pop star used inflatable strawberries as an on-stage prop, and fruit themes also commonly appear in her costumes and accessories. While performing live in Scotland in July 2009, for instance, Katy lugged a huge inflatable strawberry on stage during her performance. When asked about the success of her One of the Boys album, Katy said, “This past year and a half has been insane. I’m happy I’ve survived it. I really feel like this record really superseded by expectations. It’s been amazing. I didn’t think I would be all around the world in one year…I’ve just had so much success with this record beyond what I planned. You’re never really ready for this type of thing, and getting a tattoo would kind of be like to remember the first time.”

Katy Loves Her Some Strawberries 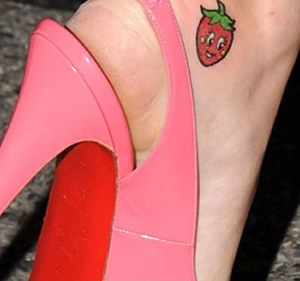 Katy Perry’s strawberry tattoo may look like a lot like a fruity scratch-and-sniff, but the ankle tat is fun and certainly says a lot about the pop star’s personality. Katy was 24 when she got the whimsical strawberry tat, and she obviously doesn’t regret the ink, since she got a matching peppermint tattoo on her other ankle in November 2011. Judging by her tattoos, her music and style, Katy Perry loves to have fun and doesn’t take herself too seriously. She does seem to have a serious love for strawberries and peppermints though. In her Snow White-esque Wide Awake video, for example, a strawberry is the poisonous fruit of choice, and the video ends with Katy donning a crazy pinwheel peppermint dress. The crazy popular pop star is unique, that’s for darn sure.