Even though Lady Gaga never had the opportunity to meet John Lennon, he has served as an inspirational for the pop star in more ways than one. During her acceptance speech for the LennonOno Grant for Peace on October 9, Lady Gaga flashed the peace sign tattoo on her wrist and explained the connection between the ink and John Lennon’s vision of peace and equality. Judging by Gaga’s tattoo and the message she consistently delivers, the singer plans to carry John Lennon’s message of acceptance forward in her own music, in her activist work, and in her life in general.

Lady Gaga was honored for her efforts in supporting the LGBT community, and was awarded the LennonOno Grant for Peace at a ceremony in Iceland on October 9, the date that would have been John Lennon’s 72nd birthday. Gaga was handed the award by Yoko Ono herself, who applauded the pop star for her work not just as an artist, but as an activist, “using her art to bring better communication to the world.” It’s obvious that John Lennon was a huge inspiration for Lady Gaga, who admitted during her acceptance speech: “When I turned 19, I got [a peace sign] tattoo to remind me that if I ever was to gain the attention of the critical mass, even in an exponentially smaller way than John had, that I would commit myself to breeding compassion from my voice.” Judging by her incredible fan base and the international response to inspirational hits like “Born This Way,” she seems to be doing just that.

During her acceptance speech, Lady Gaga elaborated on her emotional connection with John Lennon: “I grew up since I was five years old four blocks from Yoko and Sean,” Lady Gaga said. “As a young student, I often walked across Central Park and I would walk as often as I could through John’s Imagine memorial and the gateway to Strawberry Fields.” She continued, “I remember admiring the flowers, the legendary ones laid upon his memorial every day by his wife, and I remember that they were re-inspired and created into a floral art piece by an adoring homeless man who didn’t leave the Strawberry Fields for the ten years that I would walk through. I particularly liked it when he formed it into a peace sign. I even got this tattoo because of it,” Lady Gaga explained, flashing her peace sign tattoo on her left wrist.

John Lennon and Lady Gaga: “Give Peace a Chance” 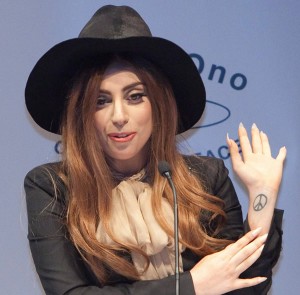 Despite the fact that Lady Gaga never met John Lennon, she claims to be a huge fan of the Beatles and John Lennon, drawn to and inspired by Lennon’s advocacy for peace and acceptance during his life. Seeking to deliver a similar message through her music and work as an outspoken supporter of the LGBT community, Gaga got her peace sign tattoo in 2006 in memory of John Lennon and his admirable vision of peace. “I wanted [the peace sign tattoo] to be a reminder to me that even though I always write fun music about fame and money, I make sure I always keep in mind the important things.” And even with her increasing fame and influence, the pop star hasn’t forgotten that message. When it comes to equality, Gaga feels that she has “a moral obligation” as a woman to exercise her revolutionary rights and make the world a better place. In working towards this ambitious and admirable goal, the singer echoes John Lennon’s message from long ago: “Give peace a chance.”