The tattoo that Lady Gaga fans are probably most familiar with is the small peace sign she has inked on her wrist. In 2006, Lady Gaga visited Shotsie’s Tattoo shop in Wayne, NJ to get the peace sign tattooed on her wrist – the first of several arm tattoos – and the artists were shocked to find her release form in their files nearly four years later. The artists at Shotsie’s are more the rocker type, and for a while failed to recognize Gaga as a former client, even as she climbed the charts in recent years with one smash hit after another. Although Lady Gaga wasn’t the wildly successful superstar back then that she is today, she was still extremely confident and determined to rise to the top of the pop star strata. According to Shotsie’s owner, Gary Walsh, “She told me I should remember her, but I tattoo thousands of people who say the same thing.”

We know that Lady Gaga has a certain affinity for tattoos, but why a peace sign? According to Gaga herself, she is a huge Beatles and John Lennon fan, even though she was born after Lennon was killed. She actually grew up two blocks from the Imagine memorial in Central Park and one block away from where Lennon was assassinated. Because John Lennon was an advocate of peace, Lady Gaga’s peace tattoo is in memory of the music legend and his admirable vision. “I wanted it to be a reminder to me that even though I always write fun music about fame and money, I make sure I always keep in mind the important things.” Lady Gaga is also an active supporter of LGBT rights, and has stated that she feels “a moral obligation as a woman, or a man, to exercise [her] revolutionary rights and make the world a better place,” in reference to her beliefs about equality. As Lady Gaga says, with both her powerful voice and her peace sign tat, “Give peace a chance.” 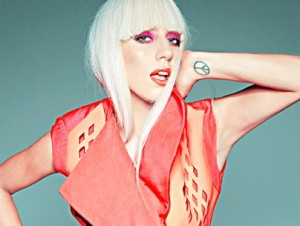 Lady Gaga got her peace sign tattoo during a study break from the recording studio in Parsippany where she was working with producer and former boyfriend, Rob Fusari. In fact, Shotsie’s owner Gary Walsh had previously inked boxing gloves on Fusari’s arm in memory of his prize-fighting father. When Fusari returned to Shotsie’s with Gaga for her peace tattoo, he took Walsh aside and said, “You should really remember this because she is going to be a big star.” Walsh also divulged that the wrist is one of the most painful places to get a tattoo, and some people even ask him to shut the door in case they cry. Not Lady Gaga though, who was a dark-haired college girl at the time. “She did fine,” says Walsh. “She was saying she was going to get famous endlessly through the tattoo.”

Lady Gaga on Becoming a Star 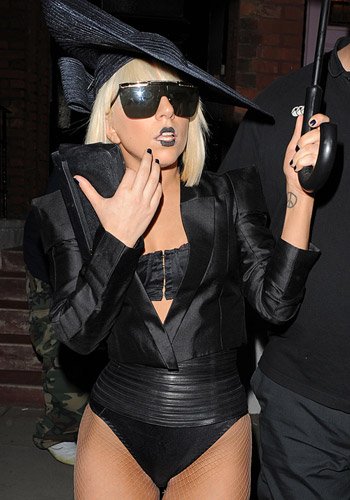 And what did Walsh have to say about Gaga’s decision to get the peace sign inked in what is essentially an upside-down position? “Everybody who wants the tattoo upside-down, I always warn them,” he said. “I give them one shot, ‘it’s upside-down, you’re gonna regret it.’” But Lady Gaga was determined to have her way – and so the superstar we know and love was born. The Manhattan native signed the form with her given name, Stefani Germanotta, but she also wrote “Gaga” at the bottom of the form along with little stars. It looks like Lady Gaga saw fame in her future even back then!