Way back in 2012, when tattoo queen Rihanna revealed the ridiculously sexy tat of the Egyptian goddess Isis inked beneath her breasts, people all over the world started going under the needle for risqué underboob tattoos inspired by RiRi. The latest person to rock a racy below-the-breast chest tattoo is actress Lena Dunham, who took to Instagram last week to show off what she (very appropriately) calls a “warrior’s chest plate/tit chandelier,” acknowledging in her social media post that she copied Rihanna’s placement.

Lena Dunham’s new tattoo is a delicate, ornamental chandelier motif inked in the center of her chest by tattoo artist Trine Grimm of Lucky 7 Tattoos in Oslo, Norway, with beaded pieces extending below each of her breasts. The actress debuted the decorative black and white piece on her Instagram account last weekend, captioning the seductive topless selfie, “Thank you @trinegrimm for my warrior’s chest plate/tit chandelier. This is my first original piece by a female tattoo artist and it felt sacred and cool and she didn’t chide me for copying @badgalriri’s placement. If you’re ever in Oslo, do meet with metal queen and let her handle your body.”

It was five years ago that Rihanna went under the needle for her now-iconic underboob tattoo, and the image is still an inspiration to tattoo lovers everywhere. Rihanna’s tattoo, which features an image of the Egyptian goddess Isis with long, graceful wings following the curve of her breasts, was inked in honor of the singer’s grandmother Clara “Dolly” Brathwaite, who passed away in the summer of 2012 following a battle with cancer. Rihanna, like Lena, debuted her chest tattoo on Instagram, captioning a photo of the sentimental piece, “Goddess Isis – Complete Woman – Model for future generations – #GRANGRANDOLLY – always in and on my heart #1love.” 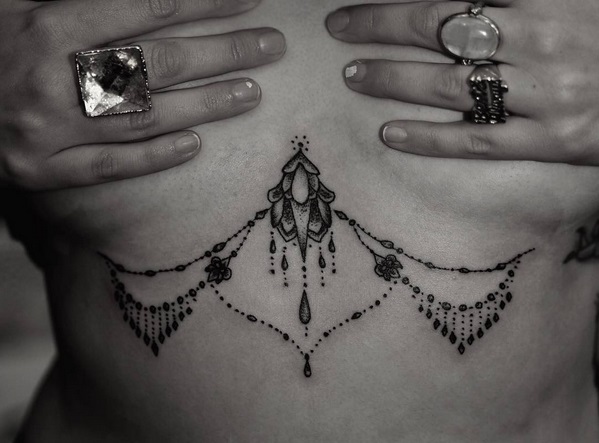 She may not be as inked up as Rihanna, who currently rocks 25 tattoos and counting, but Lena Dunham is no stranger to tattoos herself, and this new “tit chandelier” piece definitely ups her bad-gal status in our book. The 30-year-old has several other unique pieces scattered across her body, including a replica of famed NYC restaurant The Odeon’s neon sign on her butt cheek, a scene from the children’s book The Story of Ferdinand inked on her upper arm, and an image of legendary female skateboarder Lauren Thornhill Caswell skating across one of the scars from her endometriosis surgery.