Lily Collins enjoyed a memorable vacation in Korea a few weeks ago, and the 27-year-old recently revealed the new tattoo she got in Korea to commemorate the trip. Lily Collins’ new tattoo was done at a tattoo shop in Seoul, Korea, by a man who goes by the name of Tattooist Doy, a true artist known for his delicate lines and interesting use of color. The piece is located on the upper part of Lily’s back, in between her shoulder blades, and features a naked woman with her hair up in a bun, sitting on a lily pad, with only her back visible. Lily’s newest ink is located just below her “Love Always and Forever” tattoo, also located on her upper back.

Lily Collins has had the “Love Always and Forever” tattoo on her back for quite some time now, but the recent addition to the piece obviously means a lot to her. “Flashing some back for #fbf,” she wrote on Instagram. “A beautiful keepsake from an incredibly memorable Korean adventure. Thank you @tattooist_doy for adding your artistry to my personal collection. Self love is the most important kind #LoveAlwaysandForever #lilypadinbloom #KrazyinKorea.” Lily also shared a photo of the tattoo session in progress, captioning the pic, “No pain, no gain. Battling the needle with @tattooist_doy and @agentoh.”

The reason Lily Collins opted for a tattoo of a lily pad may seem obvious – her first name is Lily, after all – but judging by her Instagram caption, we have a feeling this new piece holds a much deeper meaning for the actress. In the back tattoo, the naked woman is very clearly hugging herself, which could be the reason Lily mentioned “self-love” in her caption. It’s fitting then, that Lily chose this particular location for her new tattoo – just below the “Love Always and Forever” artwork she had inked in her own handwriting back in 2012. Since she hashtagged the photo of her new tattoo “#lilypadinbloom,” it’s also possible that Lily’s back tattoo is meant to symbolize her finally stepping out from the shadow of her father, Phil Collins, to forge her own path. 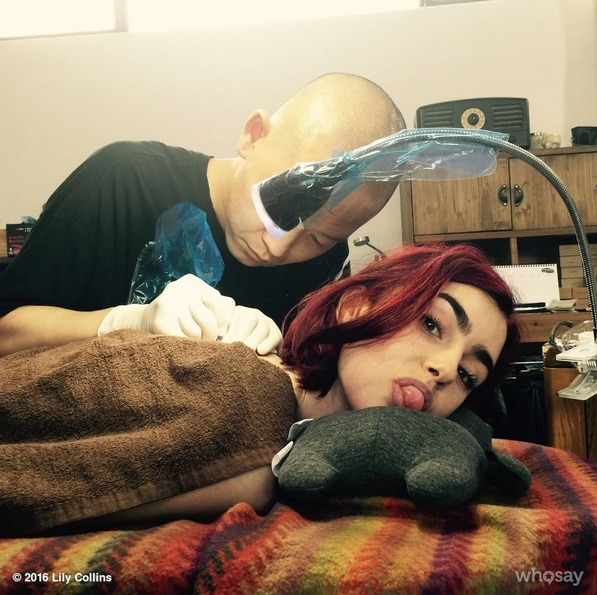 In addition to her “Love Always and Forever” tattoo and this new “lily pad in bloom” piece, Lily also has a fairy tattoo on her ribcage, an English rose on her foot, and a crown with angel wings on her wrist. What do you all think of Lily Collins’ interesting new lily pad tattoo? Let us know in the comments section below!