On the eve of the eight-year anniversary of Michael Jackson’s death, his only daughter, Paris, decided to pay tribute to the late singer the best way she knows how – by getting a new tattoo. The 19-year-took to Instagram on June 23 to show off her fresh ink, which features the word “Apple Head” written in a curlicue black script font on the top of her left foot. Paris explained the meaning behind her Apple Head tattoo on Instagram, captioning the tattoo post: “with every step I take, you lift my foot and guide me forward. Love you,” with an apple emoji. According to reports, “Apple Head” is a nickname Paris and her family would often call Michael Jackson.

Paris’ latest tattoo was inked by her go-to tattoo artist, Justin Lewis of Timeless Tattoo in Hollywood, California, who shared an Instagram snap of the fresh foot tat and a pic of him and Paris hugging, along with the caption, “I had [an] amazing time seeing ya today lil sis. Lots of love and light.” Paris obviously had a strong connection to her father before his death, and during an April interview with Harper’s Bazaar, she revealed that, growing up, she was Michael’s favorite child. “When I was a kid, I was with my dad and my two brothers,” she said. “Growing up, I was treated as the favorite because I was the only girl. I was the princess; I was perfect in my dad’s eyes.” 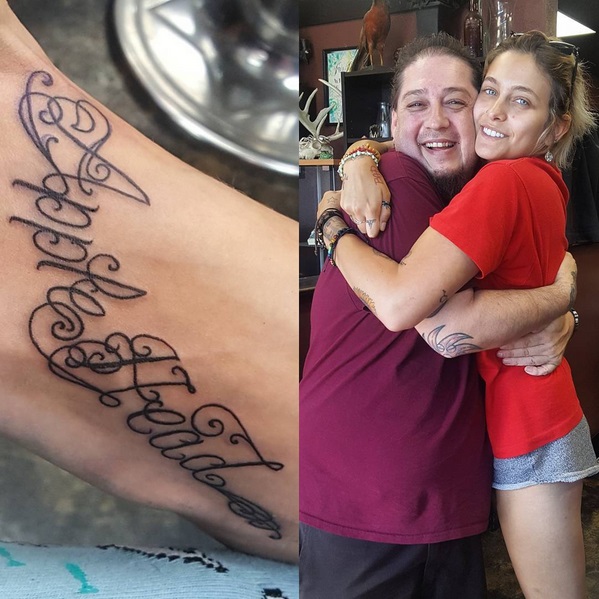 Paris, who at 19 already has dozens of tattoos covering her body, the majority of which were inspired by her father, isn’t the only Jackson sibling rocking permanent tributes to the late singer. Paris’ brother Prince also has several tattoos inked in memory of the King of Pop, including a tattoo on his calf of MJ in one of his signature poses, with angel’s wings and his face in shadow. Something tells us, neither Paris nor Prince are finished getting inked in their late father’s honor. Stay tuned to see what these two get done next!