The only part of Pink’s body that can compete with her arm tattoos are her legs, which feature plenty of their own artwork, including a massive dragon and two pretty pink bows. Pink has been gradually adding tattoos to her legs since the age of 12, when she got her first tat ever on her ankle, and she shows no signs of stopping anytime soon. Pink may have some leg tattoos that she regrets, but lucky for us, she never plans on getting them removed. “We don’t do that,” Pink once said in reference to questions about Pink and her hubby, Carey Hart, removing any of their numerous tats. “That’s the most disrespectful thing in the entire world.” What’s neat about Pink’s tattoos, particularly her leg tats, is that you can almost read them like a book – they each tell a story about a certain chapter of Pink’s loving, caring, funny, quirky, successful, rebellious, rock star life.

One of Pink’s largest and most visible tattoos is the massive dragon she has inked on the outside of her left thigh in a Japanese tribal design. Pink’s leg tattoo was inked by Australian tattoo artist Giovanni Di Mizio, and covers a large portion of the pop star’s thigh, from her hip almost to her knee. The dragon tat “was a seven-hour piece, and I think dragons are good luck,” Pink says. “And it looks hot. I think!” Apparently the inspiration behind Pink’s dragon thigh tattoo was her appreciation for the beauty of Japanese art. “I was always really obsessed with Japanese art,” Pink said recently about her various Japanese tats. “My parents have these sake bottles from Japan that are ancient and are so intricately carved and painted. They also had all this Japanese art. It’s the most beautiful culture.” Pink’s leg tattoo may look super fierce, but it’s really pure camouflage. “When I was in my mom’s stomach I sat cross-legged, so I have dimples in my leg and I hate them. So I covered them with my tattoo.” Clever girl! One of the great things about Pink’s tattoos is that you can tell from her ink how much she cares about the important people in her life. Wrapping around her right ankle, Pink has a pair of dog tags inked in black that are meant to honor her brother, Jason, and her father, Jim Moore, a Vietnam War veteran. Believe it or not, Pink’s relationship with her father has ties in music. The first song Pink ever learned and performed was “I Have Seen the Rain,” a song her dad wrote while in Vietnam. Pink used to sing the song at Veterans’ rallies, and she even covered the song on her fourth album, I’m Not Dead. Pink is thankful that her brother has never been deployed to a combat zone; he is a trainer with the Thunderbirds, a “Top Gun” pilot with the U.S. Air Force’s equivalent of the Red Arrows. Pink’s ankle tattoo is inked to look like an anklet, and on the inside of the “anklet” is her Chinese tattoo depicting the infinity symbol. 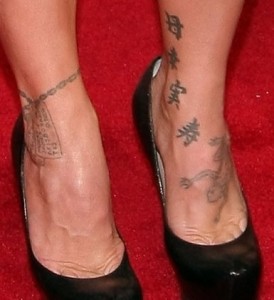 Pink’s first-ever tattoo – a Japanese kanji symbol – was inked on the inside of her left ankle when she was only 12, and stands for “good luck and happiness.” Getting a tattoo at 12 was exactly the kind of stuff Pink did during her troubled adolescent years. “I think part of me did it because it was illegal and it would piss my parents off,” Pink said about her leg tattoo. Since the first, Pink has added a number of other Japanese characters to her left leg, including symbols meaning “strength” and “the will to live.” When Pink’s mother turned 55, the pop star and her mom got matching Japanese kanji tattoos meaning “mother.” It seems Pink’s mother didn’t mind much this particular leg tattoo. “She didn’t really take that much convincing,” Pink said about the mother-daughter trip to the tattoo parlor. “Anything sentimental with my mom, she’s in. Now, she wears these little cocktail dresses and makes sure that in pictures it’s showing.” 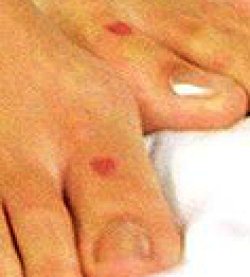 Two of Pink’s tattoos that are the most mysterious are the tiny red hearts the pop star has inked on the tops of the big toes on her left and right feet. The rebellious Pink that we all know and love may not seem super lovey-dovey, but the heart tattoos on her toes aren’t the only heart tats Pink has. She has at least two other tattoos that incorporate hearts into their design, including the heart and “love” symbol on her hip and the broken “best friends” heart on her arm. Pink hasn’t said much in public about her foot tattoos featuring small hearts, but we’re guessing they have something to do with a person she holds close to her heart.

Directly opposite the dog tags tattoo Pink has on the outside of her right ankle is a Chinese symbol that stands for “infinity.” Pink’s infinity tattoo is inked on the inside of her right ankle, and is designed to look like the pop star is wearing an anklet. There are a number of possible meanings for Pink’s tattoo featuring the infinity symbol, but we’re guessing it has something to do with her hubby, Carey Hart. Pink and Carey split back in 2008 for about two years, and the separation must have been pretty difficult on the two of them. The happy couple is now back together and raising their little girl together, so we think Pink’s infinity symbol tattoo could have something to do with the strong, ongoing bond between Pink and her husband. 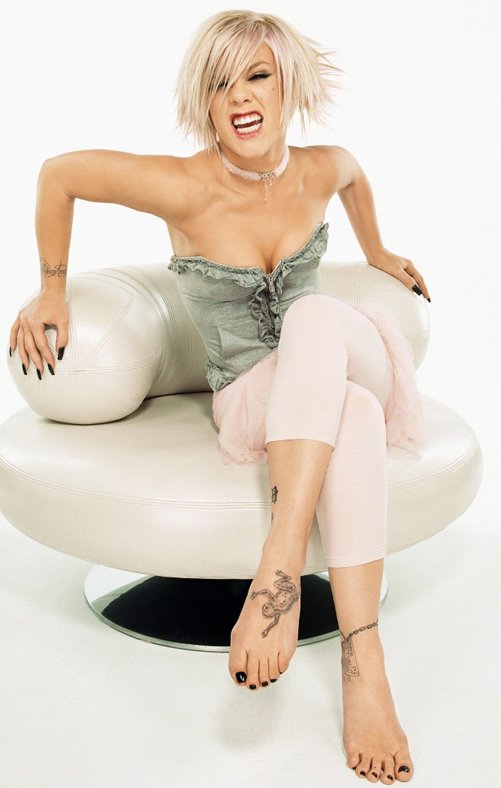 Pink has a frog tattoo inked on the top of her left foot, and no one seems to know exactly why! Pink is a self-professed animal lover through and through, and apparently frogs are her favorite type of animal – apart from dogs, of course. Pink’s foot tattoo features a relatively large black and white frog that covers a good portion of her foot, right near her Japanese symbol tattoos. We’ve heart that foot tattoos can be pretty darn painful, so Pink must really love frogs in order to get a big tat on such a sensitive part of her body.

The bows inked on the backs of Pink’s left and right thighs are one of her most unique tattoo designs. The pop star has two nearly identical pink and black bow tattoos inked on the backs of her legs, just below her butt. You have you wonder what made Pink get bows tattooed on her legs. Well, wonder no more – “In my head I’m a really talented stripper,” Pink has said about her leg tattoos. The pop star admits that the leg tattoos were the result of a drunken decision, although they definitely show off her toned butt nicely, so that’s a plus. Pink’s bow tattoos are one of the singer’s few colored tattoos, which certainly isn’t a mistake. “I don’t take color well,” Pink said in response to questions about her various black and white tattoos. “I love seeing girls with the full sleeves that have beautiful koi fish and lotus flowers and vibrant colors, but I’m all about matchy-matchy clothes, and if I had red and yellow on my arm, that would really f*ck with me.”

Ever wonder how Alecia Beth Moore got the stage name “Pink?” According to one account, Pink’s nickname was established after Steve Buscemi played the role of Mr. Pink in Quentin Tarantino’s Resevoir Dogs film. There are a number of other explanations for Pink’s fitting stage name, but this one seems to be the most viable, considering the pop star actually has a “Mr. Pink” tattoo on the inside of her left thigh. Pink got the leg tattoo when she was 17, which was in 1996, and Reservoir Dogs came out in 1992, so the timing definitely fits. Pink’s “Mr. Pink” tattoo is inked high up on the pop star’s thigh, and it’s rarely seen in public because of its discreet location. Pink’s tattoo that says “Mr. Pink” features pink words outlined in black, with music notes surrounding the “Mr. Pink,” and a scroll design directly below.