One of Rita Ora’s smallest tattoos is the tiny black anchor she added to her collection at some point before August 2012, inked on the outside of her right wrist, in basically the same exact location as Miley Cyrus’ anchor tattoo. Also like Miley’s, Rita’s anchor tat is a symbol of something bigger than herself, something that represents comfort and safety and reminds her not to get too far ahead of herself or get too full of herself, no matter how popular or successful she becomes in life. With their ridiculously lucrative careers and high-profile lifestyles, it makes sense that pop stars and tattoo lovers like Rita Ora and Miley Cyrus would want a permanent reminder to stay grounded inked on their bodies.

Rita Ora’s tattoo on her wrist features a small anchor inked in black, with the traditional cross in the center, the V-shaped “fluke” at the bottom, and a tiny outline of a circle at the very top. When asked about the meaning behind her anchor tat, Rita said, “it just keeps you grounded and shows strength.” Besides the fact that an anchor is a device that literally keeps a ship grounded, or prevents it from moving, the image of an anchor has also been used for decades in tattoos representing home or a safe port. As far back as the 1900s, many sailors got anchor tattoos after successfully crossing the Atlantic Ocean, as a symbol of their safe return home.

Rita Inked Her Anchor Tattoo Herself!

Judging by her extensive tattoo collection, Rita Ora isn’t afraid to go under the needle, nor is she afraid to turn the needle on herself. Note that in her track “Been Lyin’,” Rita sings, “I don’t always say what I want to say / I tattoo myself to show my pain.” 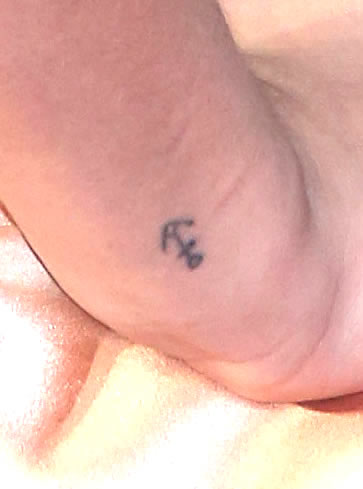 Turns out, she’s not “lyin’” about that! When asked during a Tat Nation interview what made her get her anchor tattoo, Rita responded, “I don’t know, I did it myself. It was the only tattoo I did myself.” During another interview with GQ, Rita said that’s the reason the anchor tat, which she did in Los Angeles, looks “a bit smudgy.” She does say though, “I’m really proud of the circle because it’s hard to get circles.” Rita claims that her anchor tattoo looks terrible, but we think it’s pretty cute!