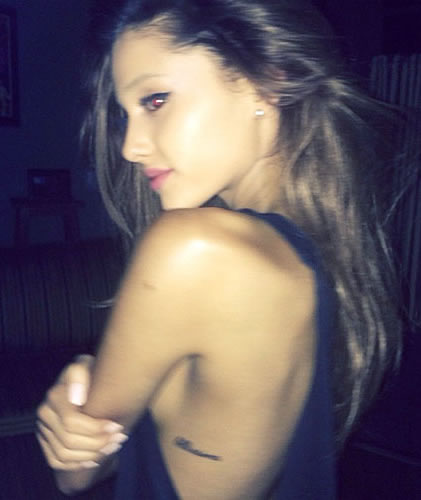 Ariana Grande has been bitten by the tattoo bug, and the former Disney star revealed via a Twitter post on March 24, 2014 that she went under the needle yet again and got a new “bellissima” tattoo on her side this past weekend as a tribute to her beloved 90-year-old grandfather, who she says is her favorite person in the world. Apparently Ariana threw a “tattoo party” at her Los Angeles pad over this past weekend, where a bunch of her friends got their first-ever tattoos and the 20-year-old pop star added tattoo number three to her collection with a sweet reminder of her childhood nickname “bellissima,” which means “very beautiful” in Italian. Unfortunately, the same day Ariana got her new tattoo, the singer also slipped in a puddle of her dog’s pee, slammed into a wall and broke three of her toes…but that’s another story.

On March 16, Ariana tweeted this message to her fans: “I plan to get a ton of little discreet tats here and there throughout my life that are meaningful to me. I thoroughly enjoy them. ‘bellissima’ is next. It’s what my grandpa calls me.” Well Ariana has apparently followed through with her promise, revealing on Twitter that she had tattoo artist Romeo Lacoste tattoo her nickname “bellissima” in a pretty script font on her left side on March 23. “A lot of my friends got their 1st tats last night at my house,” Ariana tweeted the following day, “it was such a bonding experience thank u @romeolacoste for the beautiful art.” In response to a fan’s question about whether or not she too got inked, Ariana wrote: “yes I got ‘bellissima’ small on my side. It’s what my grandpa’s called me my whole life.”

We are pretty pumped that Ariana has opted for another new tattoo, considering the fact that she got her “mille tendresse” tattoo on her neck just a couple of weeks ago. We absolutely love all of Ariana Grande’s tattoos so far, but her tattoo news was almost upstaged this time by the fact that she slipped in a puddle of her dog’s pee during her party and broke a few toes in the process. “Had a party last night and in front of a lot of people I slipped on a huge surprise pile of Ophelia piss, slammed into a wall and broke 3 toes,” Ariana texted to her manager Scooter Braun the morning after. “have a great day.” Clearly finding the news as hilarious as we did, Scooter tweeted a screen shot of the singer’s embarrassing message, writing: “This is the kind of text that gets me pumped up for the new week. Thank you.”