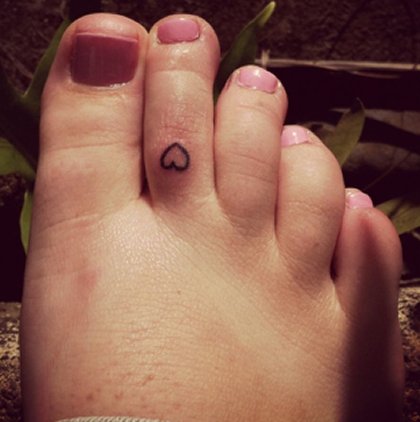 When pop star Ariana Grande went under the needle for the first time in April 2012, everyone assumed that the small heart tattoo on her toe was simply a nod to her most popular track “Tattooed Heart.” After all, there are plenty of pop stars out there, from Lady Gaga to Justin Bieber, who have gotten tattoo tributes to songs and albums of theirs. It’s likely that Ariana’s hit song had an influence on her tattoo choice, especially since she got the ink while she was recording her debut album Yours Truly and she says “Tattooed Heart” is one of her favorite songs that she’s written, but as Ariana explains it, her heart tat has a much deeper meaning. Learn about the meaning behind Ariana Grande’s tattoo below!

Ariana’s first-ever tattoo is a small outline of a heart inked in black on the top of the second toe on her right foot. She actually got it inked in the studio by a friend of the band LMFAO, and, even though the tattoo is pretty darn small, she was thrilled with the results. After she got her heart tattoo, Ariana didn’t just post a photo of her new ink on Twitter or Instagram, like most inked up pop stars…she took it one step further. The singer posted a video of the entire tattoo session on YouTube on April 21, 2012, along with the caption “I got a tattooed heart!” But she also provided fans with a more in-depth explanation of the meaning behind the ink:

Got my 1st tattoo in the studio with @Skysnuts (LMFAO) while we were recording a really fun duet which you’ll all hear soon! (not tattooed heart)..This year has been 1 of the happiest and most enlightening years for me and I felt like I wanted to do something special to remind me of this time…writing my 1st album, working with my castmates & best friends on victorious, being young, having fun and being surrounded by love.. so..I wanted to do something permanent to remind me to always be grateful and not take anything for granted so..I got a little tattoo 🙂

Like so many of her fellow pop stars, Ariana Grande seems to have caught the tattoo bug, and we are excited to report that the 20-year-old already plans on getting more ink. Back in 2013, Ariana posted the following message for her fans online: “By the way, I want another tattoo so badly. And I know what I want. And I want it for my birthday. U know that little sun I always draw on the inside of my index finger? That’s what I want to get.”

Ariana Grande’s decision to get a tattoo definitely surprised some people, especially since the former Disney star has been compared to other sweet, innocent singers like Selena Gomez (who has a few tattoos of her own, by the way). But have no fear Ariana fans, the pop star doesn’t plan on changing herself one bit. The morning after Ariana Grande’s tattoo was revealed online, she tweeted this message to her followers: “Morning everyone! I hope my news yesterday didn’t scare any of you lol..I promise I’m still the same old me 🙂 Just with a [heart] on my toe.”

2 Responses to: Ariana Grande’s Tiny Heart Tattoo on Her Toe