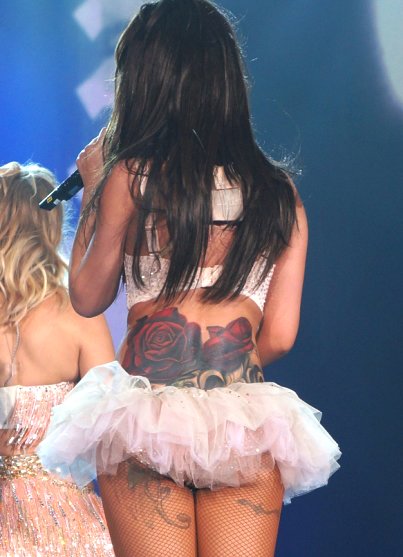 Former X Factor judge and British pop star Cheryl Cole revealed a huge new tattoo on her back in February 2013, and the ink joins several other tattoos the singer already has scattered across her body. The back tattoo was debuted during the Girls Aloud reunion tour in the UK, and, despite the fact that the singer vowed she would never get another “tramp stamp,” the gigantic rose tattoo takes up the majority of the singer’s lower back. There was no missing Cheryl Cole’s new ink during the British band’s ten-year anniversary tour, as the singer sported a series of skimpy outfits, including a cropped top, pink tutu and backless dress.

Cheryl Cole already rocks a well-known collection of tattoos, but the rose tattoo may be the pop star’s last. Speaking about the meaning of her back tattoo, Cheryl said, “It was really painful but I think I’m done with tattoos now. It wasn’t for any particular reason, I just like the design. It took 15 hours in total.” The back tattoo features two large red roses and extends from just above the singer’s butt all the way to the middle of her back. The tat, which has gotten mixed reviews from Cheryl Cole’s fans, reportedly took 15 hours to complete, which is far longer than we’d like to spend under the needle, that’s for sure. And the design may not have been for any particular reason, but it did cover up a butterfly tat the singer previously had on her back. 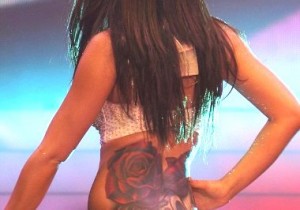 Cheryl Cole already rocks quite a few tats, including a tribal design on her hand, barbed wire ink around her right thigh, and the words “Mrs. C” on the back of her neck. The pop star’s tattoo artist, Nikko Hurtado, revealed via Twitter back in January that he was working on the pop star’s newest tattoo, and he was quick to comment on Cheryl’s high tolerance for pain. “Just finished tattooing @CherylCole for two days in a row,” Hurtado posted online. “Man she is a tough cookie. Can’t wait to show you guys what I’m doing for her.” In return, Cheryl mentioned Mr. Hurtado during an interview, saying “[The tattoo] was done by this amazing artist called Nikko Hurtado who basically travels round the world going to conventions.”

Many people see Cheryl Cole as a role model, and even Megan Fox is a fan of the pop star’s tattoos, saying, “I don’t know that many British girls, but what’s her surname? Cheryl? Cheryl Cole, yeah she’s hot, and I love her tattoos.” Cheryl Cole’s most recent tattoo on her back isn’t quite finished yet, so, even though she claims to be done with tattoos for now, she is planning to add to the rose inking in the near future. “Tattoos are addictive, they really are. If it was up to me – and I could be brave for one day – I would have my whole back done,” the pop star once told InStyle magazine. “My friends say ‘Cheryl, please, you might regret it’ – but to me, it’s art.”