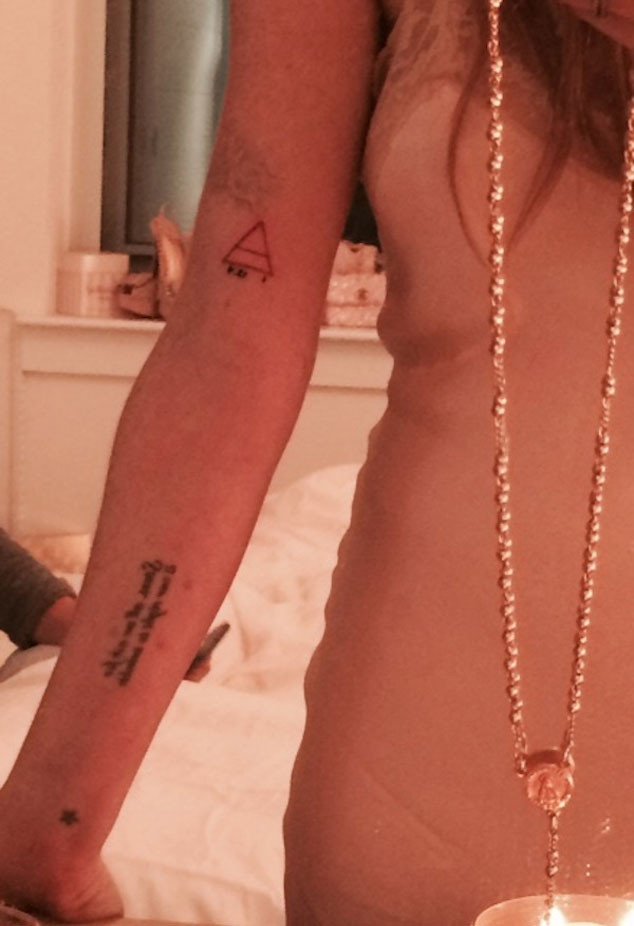 Notoriously troubled Lindsay Lohan appears to be taking her long-awaited recovery pretty seriously, and the actress recently took some time for herself to get an inspirational new tattoo to prove it! On October 15, 2013, LiLo took to Twitter to reveal the new artwork she got on the inside of her right bicep – a small red outline of a triangle with a horizontal line intersecting it – writing to all her followers, “ok here’s the final product, from me to you. Wanted you guys to see it first. Feeling good and love you.” Sounds like Miss Lohan is finally headed down a new path…one that includes spiritual tattoos!

You can barely tell, but Lindsay Lohan’s tattoo was actually inked on top of an old piece, which featured a double red triangle and the quote “what dreams may come…” inked in capital black letters. The new-and-improved triangle artwork was inspired by a concept from Steve Pavlina’s book Personal Development for Smart People, which highlights the seven principles of personal growth. According to a diagram the 27-year-old conveniently provided along with the pic of her new tat, the funky triangle symbol represents love, truth, power, oneness, intelligence, authority and courage. That’s deep, Lindsay!

Lindsay Lohan recently relocated to New York City after completing a stint in rehab, and has begun filming a reality show about her recovery for the Oprah Winfrey Network.