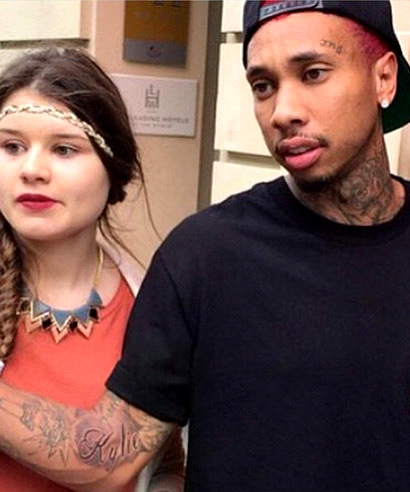 Rapper Tyga finally confirmed his relationship with Kylie Jenner in a sweet Instagram tribute in March, and now the 25-year-old has officially put his love in writing, showing off a brand-new “Kylie” tattoo on his arm while posing with a fan late last week. According to reports, Tyga got his “Kylie” arm tattoo on April 24, in an attempt to show the 17-year-old reality star that he is fully committed to their relationship.

Judging by Tyga’s new tattoo, it appears that Kylie Jenner is the true apple of his eye, despite claims by the rapper’s ex and baby mama, Blac Chyna, that he has been “after her ass” for months. Even so, rumors about a possible romantic relationship between Tyga and Kylie Jenner started circulating months ago, and it wasn’t until March that the rapper finally confirmed that the two were dating, captioning a pretty photo of the reality star: “Certain things capture your eye, but only a few capture the heart.” Awww! Right??

Well, the only problem is, Blac Chyna (who is an ex-stripper btw) recently went public with text messages that were allegedly sent to her by Tyga, in which the rapper said “I want to be with u,” in a seemingly ongoing play to rekindle their romance. Kylie was reportedly furious about Tyga’s flirty messages with his ex, and it’s possible that the rapper’s new “Kylie” arm ink is a very permanent attempt to win back the 17-year-old’s trust and prove that he loves her and only her.

The first images of Tyga’s new tattoo were posted on Instagram by a Kardashian fan, and show the rapper with his arm outstretched and a new tattoo reading “Kylie” scrolled across the inside of his right arm in a black script font. Some fans who aren’t all that thrilled about the fact that Tyga got a “Kylie” tattoo are claiming that the ink is fake, but in a recent Instagram image posted by Tyga himself, you can just make out the top of his new Kylie tattoo, in the same font and in the exact same spot on his arm.

If Tyga is devoted enough to Kylie to get her name inked on her arm, they must be the real deal, right? Well, Blac Chyna had a tattoo of Tyga’s real name, Michael, on her hand before covering it up a few months ago, and Tyga also reportedly has a tattoo dedicated to Blac Chyna, so let’s take this new ink with a grain of salt, shall we?