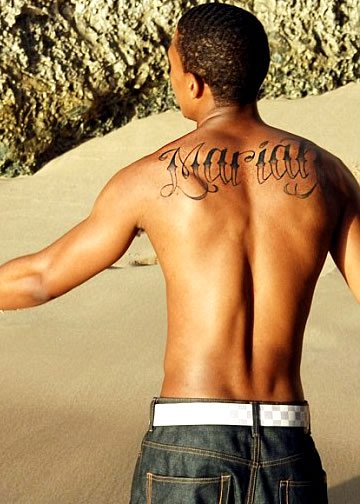 Nick Cannon probably never thought he would regret the giant “Mariah” tattoo he had inked on his back just before tying the knot with the infamous Mariah Carey, but now that the couple is considering divorce, you have to wonder what he’s going to do about that gigantic reminder of his failed marriage? Nick Cannon surprised pretty much everyone when he announced last week that he and Mariah had been living in separate houses for the past few months, and while Mariah has remained tight-lipped about the potential split, it appears that a divorce really is on the horizon for Mr. and Mrs. Cannon.

After making the surprising announcement last week that there was “trouble in paradise,” Nick Cannon appeared on America’s Got Talent without his wedding ring, spurring rumors that the celebrity couple was on the outs. Mariah too, was spotted this week without her wedding band, instead sporting a butterfly ring on her left finger when she stepped out without Nick in New York on August 25. According to reports, Nick and Mariah apparently separated back in May, and rumors are now indicating that the couple has been secretly working with their lawyers to figure out the necessary property settlement and custody details.

While Nick went all out with his enormous “Mariah” tattoo tribute to his soon-to-be-wife, the songstress opted for a more understated shout-out to her hubby, simply adding “Mrs. Cannon” to the small butterfly tattoo she had inked on her lower back prior to the couple’s 2008 wedding. “I never had a tattoo before, and it’s his first tattoo also, that’s why it was a big deal,” Mariah Carey told Ellen about the couple’s tats in an interview after their wedding in the Bahamas, which took place just two months after they first met on the set of her music video for Bye Bye. Fortunately for Mariah, her “Mrs. Cannon” tat will probably be pretty easy to cover up, post-divorce.

As for Nick Cannon, he had this to say about the couple’s marriage tattoos prior to the recent “trouble in paradise”: “To me rings are special and exciting, but tattoos mean more than anything. They’re forever and ever. They professed our love.” Unfortunately, Nick is now stuck with his “Mariah” back tattoo “forever and ever.” Unless he decides to get it removed, that is!