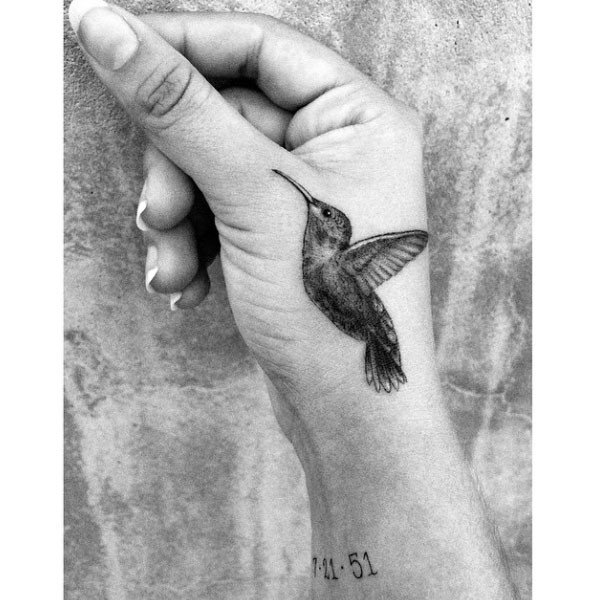 Robin Williams’ daughter, Zelda, obviously misses her father, whose death took place just two months ago, but the 25-year-old is keeping the memory of her father alive with a sweet new tattoo dedicated to the beloved actor. On October 21, Zelda Williams shared a photo of a brand-new tattoo on her right hand, which features a life-like hummingbird, along with the actor’s date of birth “7.21.51.” on her right wrist. Zelda’s hand and wrist tattoos were inked by the infamous Dr. Woo of Shamrock Social Club tattoo shop in Hollywood, and Zelda included this caption along with the instagram photo of her hummingbird tattoo: “For poppo. Thank you to the incomparable @dr_woo_ssc for so beautifully bringing my reminders to life. I’ll always put my hand out to shake with a smile.”

Zelda Williams has been a bit reclusive recently, as far as social media goes, due in large part the taunts aimed in her direction following her father’s death, and this photo of her new tattoo marks the first time she has shared a photo on Instagram since August. Just a few weeks prior to getting her hummingbird tattoo tribute to her father, Zelda honored the late actor in another way, tweeting on October 10, “Today is #WorldMentalHealthDay. Mental illness is often misunderstood & misrepresented, but that’s starting to change. My dad openly fought depression his whole life, both in general and his own. No matter what anyone says, it is a FIGHT. Fight on.”

As for the meaning behind the hummingbird in Zelda’s tattoo, the graceful bird appears to carry some special significance for the Williams family.

When Robin’s friends and loved ones gathered at the landmark Curran Theatre in San Francisco in September to mourn the actor’s passing, attendees at the memorial were given wristbands that showed a hummingbird and the phrase “Love the Stillness of Life.” Hummingbirds in particular are a popular tattoo design and can symbolize a variety of things, including love, overcoming obstacles, strength, hope, and living life to the fullest. Her father’s death obviously had a big impact on Zelda’s life and she can now be sure to remember him each and every day with her sweet new hummingbird tattoo.