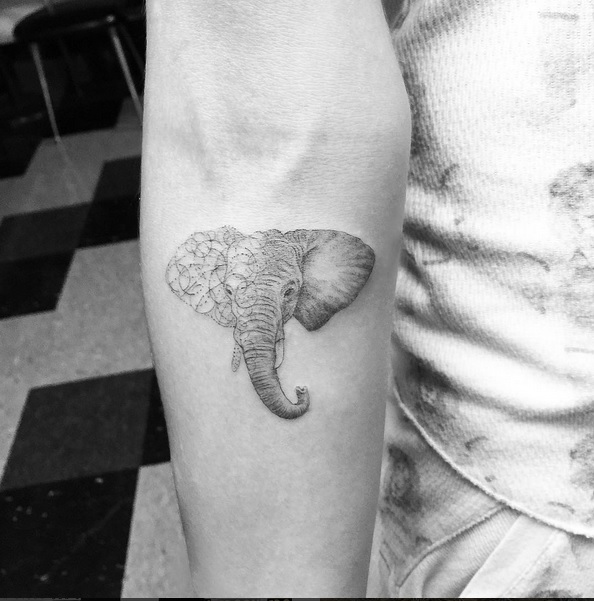 Things have been pretty quiet on the tattoo front for Cara Delevingne lately, though the British supermodel has been busy promoting her new film, Suicide Squad, due out in August, but she finally went back under the needle this week for an awesome elephant tattoo, courtesy of the famed Brian Woo, better known as Dr. Woo. Cara took to Instagram to debut her brand-new elephant tattoo, inked after she attended the Comic-Con event in San Diego on July 21, captioning the black and white photo, “I’ve been Wooed @_dr_woo_.”

Cara Delevingne’s latest tattoo features the head of an elephant inked in black and gray on the inside of her right forearm, with half of the elephant done as a traditional portrait, and the other half featuring Dr. Woo’s famous dot and circle design. Dr. Woo also posted a photo of Cara’s elephant tat on Instagram, along with the caption: “Lil [elephant emoji] for @caradelevingne #halfneedle.” The half needle technique of tattooing results in fine-line designs, and, according to Dr. Woo, that’s pretty much all anyone wants anymore.

Dr. Woo is a well-known tattoo artist at Shamrock Social Club in Hollywood, California, and his incredible dot and line technique makes him the go-to tattooer for plenty of our favorite inked-up celebrities, including Justin Bieber, Ellie Goulding, Miley Cyrus, Drake and Rumer Willis, among others. Even Cara Delevingne has hit up Dr. Woo for at least one other tattoo – the small but intricate coat of arms tattoo she had inked on her ribcage in January 2015. 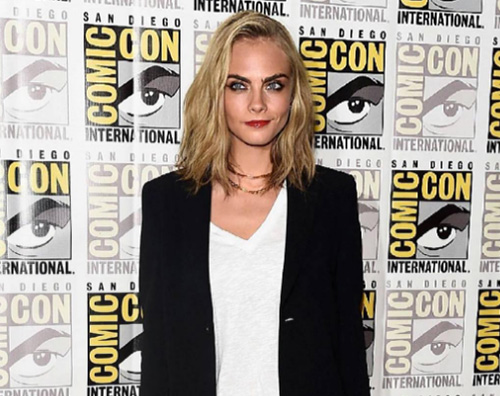 Cara’s new elephant arm tattoo comes amid some other big changes for the supermodel, including a new short, blonde bob, and joins a number of other animal tattoos she already has inked on her body, including a dove, lion head and wasp, all located on her fingers. The elephant piece is definitely her largest animal tat to date though, and, thanks to Dr. Woo’s unrivaled talent and signature style of tattooing, it’s also one of her most beautiful tattoos!