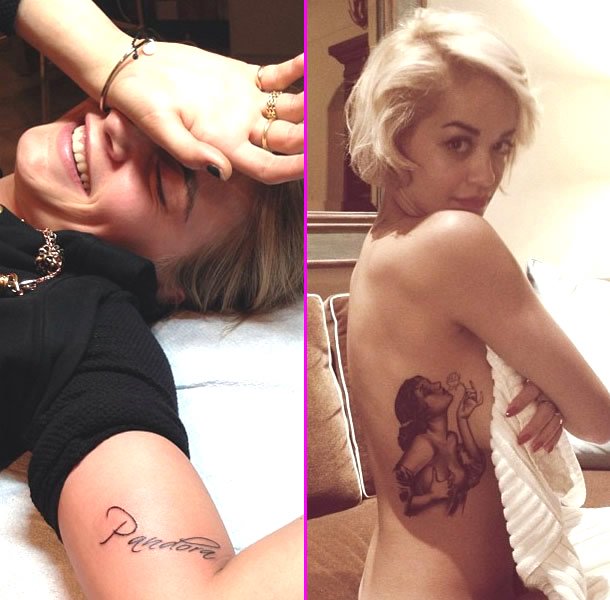 Rita Ora and Cara Delevingne have been bitten by the tattoo bug, and the gal pals recently hit up the infamous NYC tattoo artist Bang Bang for some new ink…yet again. The two girls, who were in the city attending New York Fashion Week, spent the evening of September 11, 2013 at Bang Bang’s tattoo parlor, and Cara got a tat of her mother’s name “Pandora” on her arm, while Rita walked away with a “realistic version of a Vargas painting of a pinup girl” inked on her ribcage. The 22-year-old singer debuted the impressive ink in a shirtless Instagram pic on September 15, along with the caption: “Say hello to my new little friend Rosetta…thank you @bangbang she’s beautiful.”

Keith “Bang Bang” McCurdy famously inked Cara Delevingne’s first tattoo (an awesome lion head on her finger) last May, and the British model has since commissioned the talented tattoo artist to ink several other pieces, including a large tattoo of her initials on her hand and “Made in England” on the bottom of her foot. Cara was accompanied by Bang Bang’s favorite celebrity client, the inked-up Rihanna, during that first session, but RiRi was apparently unavailable last week, because the model chose Rita Ora to get inked with this time. Rita, like Rihanna, is a big fan of tattoos, and the singer previously visited Bang Bang’s New York City tattoo parlor back in May to get a pretty dove inked on the back of her neck/right shoulder area.

Like most of Cara Delevingne’s tattoos, the new “Pandora” ta 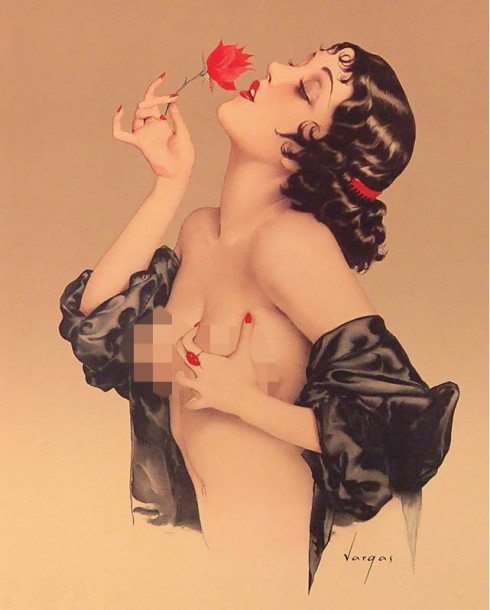 ttoo on her left bicep is relatively discreet, but Rita’s side tattoo of the 50’s-style Alberto Vargas pinup girl is definitely large and in charge. “When she’s standing it’s about 7 inches tall,” Bang Bang said about the ink, “but when she’s laying down it’s about 10 inches, plus.” There’s no doubt that Rita’s ribcage tattoo was the more painful of the two, but Cara had something in mind that she figured would keep her friend’s mind off the needle. According to Bang Bang, Cara randomly pulled a hamburger costume out of her purse during the tattoo session, put it on, and was like “just me and my hamburger, what, what!”

Rita’s sexy ribcage tattoo took five hours to complete, and Bang Bang said she was “really tough” and did “great” during the painful session. That’s pretty impressive, considering Bang Bang said the pinup girl was probably “the most detailed” tattoo he has ever done for a celebrity. 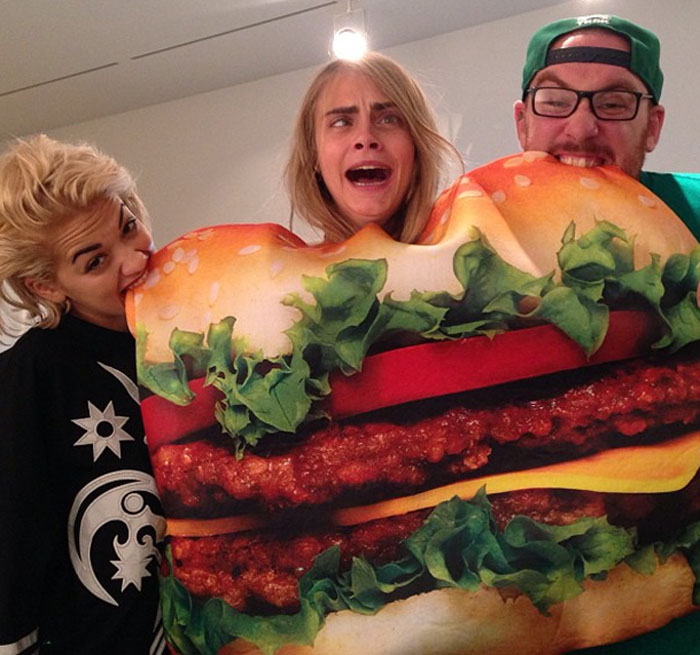 Hear that Rihanna?? That sounds like a challenge to us! As for Cara, she reportedly texted Bang Bang the following day and wanted to come in for yet another tattoo. “She really wanted me to tattoo her favorite piece of food,” Bang Bang revealed, “but I told her to wait a bit, just to see if she still wants it.” Considering the fact that Cara’s favorite foods are bacon and cheese, we’d have to say that was some darn good advice, Bang Bang.