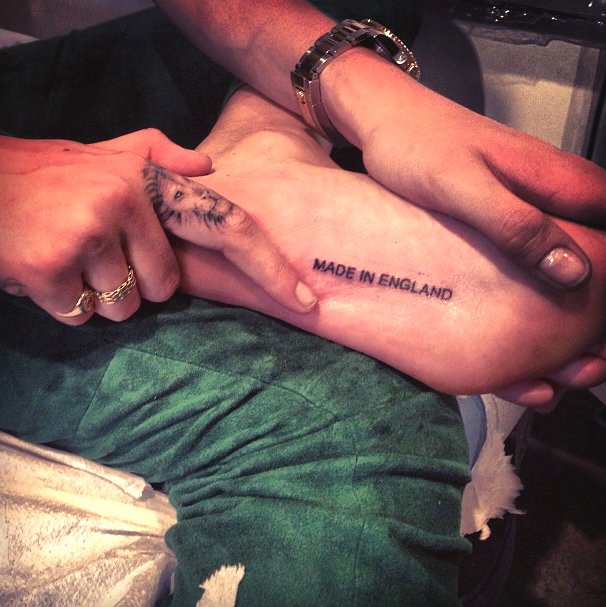 Cara Delevingne jumped on the tattoo bandwagon for the first time when she debuted her awesome lion finger tat in May, and in the past two months alone, the model added a second and just recently a third tattoo to her rapidly growing collection. On July 14, Cara Delevingne debuted a simple tattoo inked in black on the bottom of her foot that reads “Made in England” in capital letters, and the ink was done by none other than Keith “Bang Bang”McCurdy – the same artist responsible for Cara’s first and second tattoos and almost all of Rihanna’s tattoos. It was RiRi herself who convinced Cara Delevingne to get her first tat done by Bang Bang, and we’re guessing Cara wasn’t disappointed!

Cara’s Personal Reason for Getting Tat on Her Foot

Clearly proud of her foot tattoo, Cara Delevingne debuted the ink on her Instagram account on July 14, along with the caption: “Made in England! Finally…@bangbangNYC.” Apparently, Cara had been dying to get the ink, despite the fact that Bang Bang warned her getting the tat on the bottom of her foot would be pretty painful. Before Cara actually went under the needle for her “Made in England” tattoo, Bang Bang revealed that he would have to numb the model’s foot to reduce the pain. And after getting two very visible tattoos on her hands, Bang Bang explained Cara’s reasoning for getting the discreet tat on the bottom of her foot. “She likes that no one will see it except a close few. Tattoos aren’t always for other people. She says this one’s going to be for her.”

Born and raised in London, England, Cara Delevingne is clearly proud of her hometown, and now she has a permanent reminder of where she came from before she struck it big as a fashion model. We’re wondering about the previously un-inked Cara’s decision to get three tattoos in three months though….she’s starting to sound a bit like the tattoo-obsessed pop stars we know and love, including Justin Bieber, Harry Styles and, of course, Rihanna, one of Cara’s very best gal pals. Although Rihanna was there for moral support during Cara’s first tattoo session, it looks like the British model went solo for her third. Don’t worry though, after getting her foot tattoo, Cara headed to Monte Carlo to meet up with tattoo mentor Rihanna for some fun in the sun…and to show off her “Made in England” ink too, for sure!