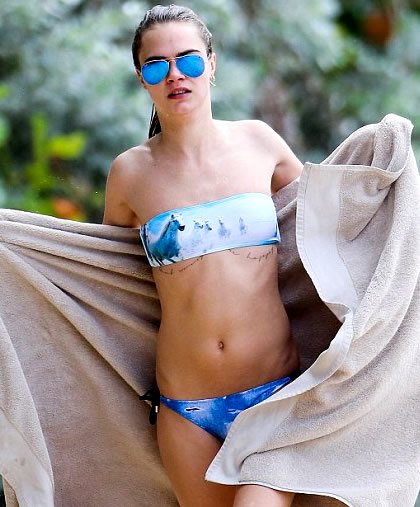 British model Cara Delevingne spent her Christmas holiday splashing about in the Caribbean with her family this week, and the 21-year-old showed off more than just her rockin’ bikini bod. Before donning a life jacket to try her hand at wakeboarding (which was a pretty unsuccessful endeavor, might we add) Cara slipped into a cute blue and white bandeau bikini and accidentally flashed a brand-new chest tattoo in the process! Apparently, Cara treated herself to some sexy – and inspiring – new ink for Christmas, getting the phrase “don’t worry, be happy” written in black italics below her breasts.

Proving herself once again to be a fun-loving family gal, Cara spent Boxing Day – December 26, 2013 – playing around in the surf at Heron Bay with her loved ones and living the “don’t worry, be happy” mantra that inspired her chest tattoo. The inspirational tat was done in two sections, with “don’t worry” inked in a horseshoe shape below her right breast, and “be happy” inked in the same shape below her left breast. Not only is Cara Delevingne’s tattoo a popular mantra, but it is also the title of Bobby McFerrin’s 1988 single, which was released a few years before the model was even born. 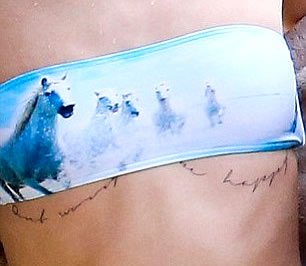 Cara surprised quite a few people when she went under the tattoo needle for the first time in May 2013, but the model has since said that she wants to be “covered” in tattoos. In addition to her new chest tattoo, the formerly tattoo-free Cara has added eight other tats to her collection this year alone, including the word “silence” inked on her wrist, her mom’s name “Pandora” on her arm, an awesome lion tattoo on her finger, and a “Made in England” tat on the bottom of her foot. It’s pretty obvious that Cara Delevingne doesn’t plan on listening to those people at her modeling agency who have repeatedly asked her to stop getting inked, and we’re glad to hear it! 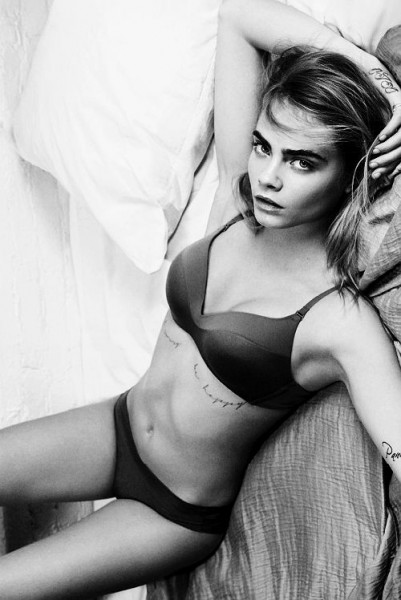 Wondering why Cara chose such an odd place to have her “don’t worry, be happy” tattoo inked? Earlier this year, the model commissioned Brazilian tattoo artist Daniel Tucci to tattoo the Roman numeral 12 on her right ribcage, and, according to him, “that’s her lucky place, below her breast.” It must also be Rihanna’s lucky place, because the pop star (and BFF to Cara) has a large tattoo of the Egyptian goddess Isis inked in almost the exact same spot as Cara’s chest tattoo. Come to think of it, Cara showed off her quote tattoo while she was in Barbados, which is where RiRi is from and where she also spent her Christmas holiday. Why do we have a feeling Rihanna played a part in this…