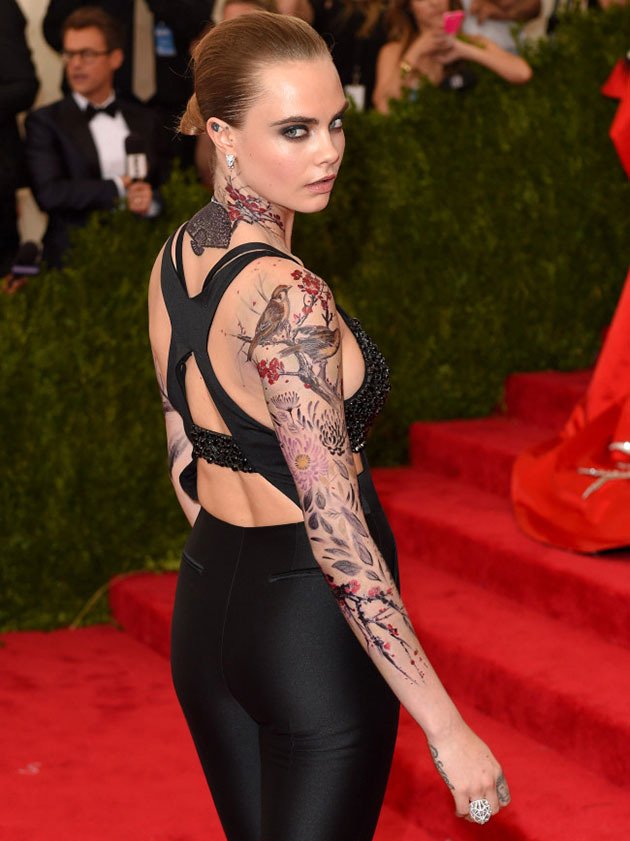 By now, you’ve probably all seen the stunning ink Cara Delevingne sported at the 2015 Met Gala last week, none of which were real, but did you know that the faux tattoos were applied by hand courtesy of celebrity go-to tattoo artist, Bang Bang? And that the whole deal took a whopping 11 hours to complete? We were more than impressed to see Cara Delevingne’s tattoos of Chinese birds and plum blossoms adorning her upper body during the event, and we’re guessing you were too. Read on to learn all about what went into the labor-intensive process and whose idea it was in the first place!

When faced with this year’s Chinese Whispers: Through the Looking Glass theme for the Met Gala, Cara Delevingne decided to up the ante a bit and add a little extra flair to her beaded cut-out black Stella McCartney jumpsuit and sleek up-do. New behind-the-scenes photos show celebrity tattoo artist “Bang Bang” working on Cara Delevingne’s custom ink, which took a team of five artists and 11 hours in the makeup chair to complete. The custom tattoo includes beautiful, life-like images of swallows, floral branches, and plum blossoms, which symbolize perseverance and resilience in Chinese culture. And while, with Cara’s growing obsession with tattoos, we wouldn’t have been surprised to learn that at least some of the ink was real, it turns out it will last for only ten days. 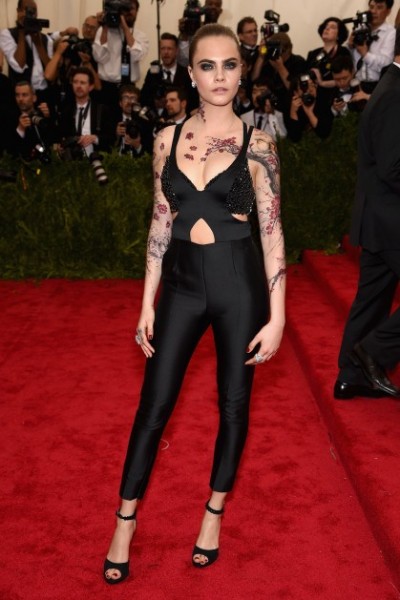 “It was actually Cara’s idea to create a custom tattoo for the Met Gala,” Bang Bang said in a recent interview with Style.com. “She asked me to design it last Wednesday, so the deadline was tight, but my motto is to always say yes. I created stencils that were applied to Cara’s body until they were about 95 percent dry for guidelines, then filled the rest in freehand with markers.” If you’re familiar with Cara Delevingne’s lion finger tattoo, or some of Rihanna’s more intricate ink, you won’t be surprised to learn that Bang Bang was the mastermind behind Cara’s Met Gala ink. The tattoo artist is incredibly talented, and has created some of the most stunning and life-like tattoos we have ever seen, on celebrities like Katy Perry, Justin Bieber, Rihanna, and Cara herself.

Even Rihanna, who is responsible for introducing Cara to Bang Bang and thereby sparking her addiction to tattoos, was impressed with the British model’s Met Gala tattoos, and reportedly called the custom ink “sick.” We have to admit, we did not see Cara Delevingne’s homage to Chinese culture in the form of custom tattoos coming, but we’re happy to see the model pushing the envelope yet again!