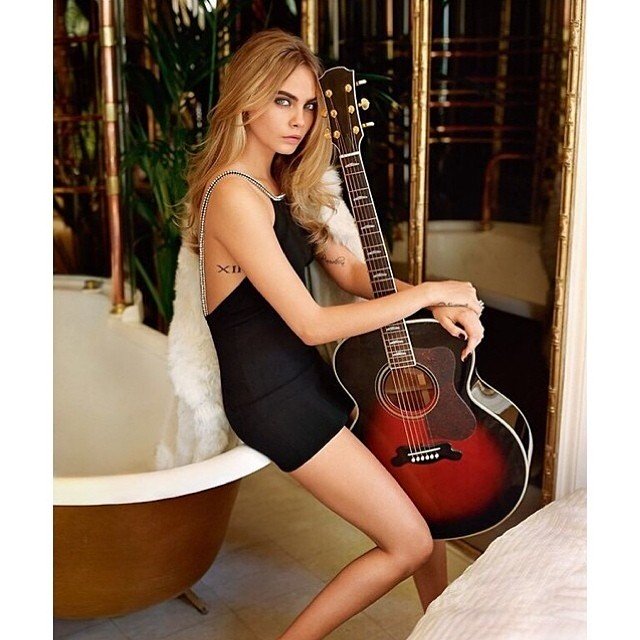 Cara Delevingne is one of the hottest models on the catwalk these days, best known for her impressive eyebrows, quirky sense of humor and rapidly growing collection of tattoos. However, it seems that not everyone is too thrilled about Cara Delevingne’s tattoo obsession; the 21-year-old reportedly had a showdown with her modeling agency bosses recently, shortly after showing off the “breathe deep” tattoo on her arm. According to reports, Cara was told that by going under the needle for more tattoos in the future, she was putting herself at risk of losing catwalk work. Uh-oh Cara!

There’s no question that Cara is the most tattooed high-profile model walking the catwalk today, and while other popular models like Kate Moss and Heidi Klum also sport some ink, Cara Delevingne’s tattoos definitely overshadow all the rest. The 21-year-old already has a whopping 14 tattoos to her name, and despite grumblings from respected fashion houses like Burberry and Chanel, it doesn’t look like she plans on stopping anytime soon. According to one report, Cara “told bosses that anything can be airbrushed these days and [that her tattoos] wouldn’t affect her professional appeal.”

On the contrary, tattoos have actually become an important part of the fashion industry in recent years, and both Cara Delevingne and fellow pop star Rita Ora have launched their own clothing lines inspired by their respective tattoos. However, Cara’s modeling bosses are reportedly concerned because “[tattoos are] not ideal for catwalk shows, especially when she’s modeling delicate summerwear, and particularly feminine collections.” Fortunately for Cara, “her family [is] totally supportive, and couldn’t care less, so that’s all she’s really bothered about.” In short, Cara told them to mind their own business.

We have to give Cara credit for standing her ground when it comes to her tattoos…it is her body after all, and her tattoo collection is one of the things that really sets her apart from other models in the industry. And even if she did start losing catwalk work because of her ink, she can always fall back on her blossoming acting career, with roles in the upcoming Peter Pan film and plenty of other offers coming in following her performance in Sky Arts series Playhouse Presents. Keep up with the tattoos, Cara, we love ’em!