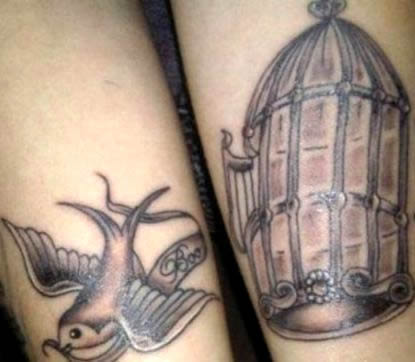 When Cher Lloyd’s uncle Edward “Boo Boo” Smith passed away from an accidental methadone overdose in September 2010 at the age of 34, the 17-year-old singer found her own way to pay tribute to her beloved uncle – with two new tattoos. Cher was competing on the seventh season of The X Factor at the time of her uncle’s death and was unable to attend his funeral, which must have been devastating for her. But she pulled through and in March 2011, Cher got a large tattoo of a bird in flight, carrying a banner that says “Boo” (her late uncle’s nickname) on the inside of her right forearm. During the same tattoo session, in the same spot on her left forearm, Cher Lloyd got a tattoo of an empty birdcage with the door open (which is suspiciously similar to One Direction member Harry Styles’ birdcage tattoo, by the way). When Cher puts the inside of her two forearms together, the resulting image is a bird flying out of an open birdcage.

The passing of Cher’s young uncle was particularly devastating because “Boo” was apparently tricked by someone else into taking a lethal dose of methadone, a substitute for heroin, which led to his death. “I got a tattoo in memory of my uncle which is a bird flying out of a cage,” Cher said after getting her arm tattoos. “I remember growing up my uncle always had birds, and I thought that it would be interesting to do something different other than getting his name tattooed on me. I thought there was something special about leaving the cage door open and having the bird fly out the other side.” It’s possible that Harry Styles’ birdcage tattoo could have a similar meaning to Cher’s, although Harry’s tat features a closed birdcage while Cher’s is open. These Cher Lloyd tattoos came just two months after the singer debuted the Tracy Chapman song lyrics tattoo on her left arm and the diamond tattoo on her right hand, and the pop star debuted her tribute tats on Twitter, along with the caption: “Happy birthday uncle boo, missing you. New tattoo. Xxxx.”