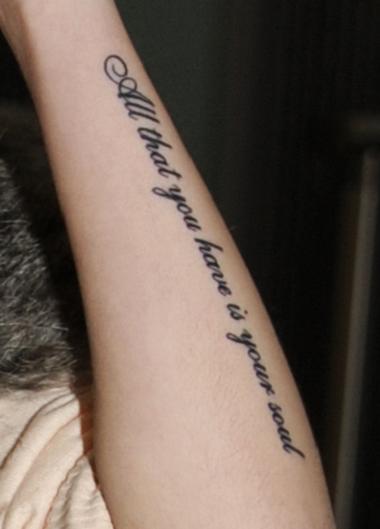 Being that she is a successful singer with a passion for music, it’s no wonder Cher Lloyd has several large tattoos inspired by song lyrics. From the classic “You Are My Sunshine” to Tracy Chapman’s “All That You Have is Your Soul,” music obviously plays an important role in Cher’s personal and professional life, and the pop star’s tattoo collection is proof of that. Cher Lloyd already has several lyrics tattoos inked on her arms, and the pop star definitely plans to add more in the future. According to Cher herself, she plans on getting full sleeves, “on the insides, not the outsides [of her arms],” she says, “because that’s like not feminine.” Although not all women can pull off full sleeves, we have a feeling Cher Lloyd will somehow look even hotter with her arms totally inked up!

Cher’s “All That You Have is Your Soul” Lyrics Tat

Like many other inked-up pop stars, Cher Lloyd has a tattoo that is dedicated to her mother, Diane, whose “favorite song in the world” is Tracy Chapman’s “All That You Have is Your Soul.” As a tribute to her beloved mom, Cher went and got the song title “All that you have is your soul” tattooed on her left arm in January 2011, shortly after leaving The X Factor, where she competed during the show’s seventh season. “The first thing I’m going to do is get a new tattoo,” Cher reportedly said. “I’m going to get a lyric from my mum’s favorite song tattooed on my wrist.” The singer apparently changed her mind about the location though, since the lyrics tattoo is actually inked down the outside of her left arm, from her wrist to her elbow. We’re guessing the quote was a little too long to fit on her wrist! 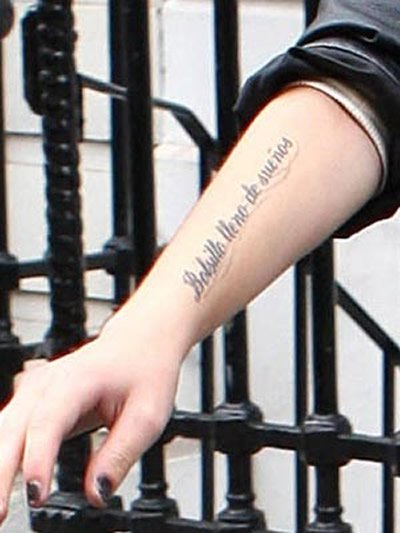 Cher Lloyd’s right arm is pretty jam-packed with tattoos now, but the very first tat the singer added to that arm is the lyric “Bosillo lleno de sueños” from Alicia Keys’ track “Empire State of Mind (Part II).” Cher’s arm tattoo is written in Spanish and translates to “pocketful of dreams,” which is actually a pretty sweet sentiment if you ask us! According to Cher’s then-boyfriend, who spilled the beans about the pop star’s arm tattoo to the press, “She doesn’t speak Spanish, she just thought it looked pretty and loved that song.” Her tattoo was somewhere around her third tat and was inked before she turned 18, along with several other Cher Lloyd tattoos. The Spanish quote tat is inked on the inside of Cher’s right arm, extending from her wrist, almost to the inside of her elbow

Cher Lloyd’s “You Are My Sunshine” Lyrics Tattoo

Sticking to the lyrics theme, Cher Lloyd has another tattoo inked on the inside of her left arm that reads “You are my sunshine, My only sunshine” in an elegant script font. The song “You Are My Sunshine” was first recorded in 1939 – which makes it an oldie but a goodie – and has been covered since then by such greats as Aretha Franklin, Tina Turner, Johnny Cash, Ray Charles and Bing Crosby. 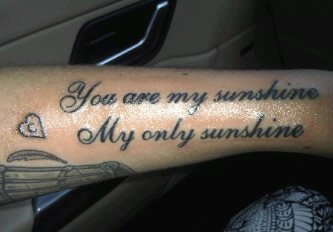 The song’s full chorus goes like this: “You are my sunshine, my only sunshine / You make me happy when skies are gray / You’ll never know dear, how much I love you / Please don’t take my sunshine away.” Cher added her “You Are My Sunshine” lyrics tattoo to her collection in 2011, and we’re guessing the tat was meant as a tribute to then-boyfriend (now fiancé) Craig Monk. A few months after getting the arm tattoo, Cher Lloyd tweeted this message: “@craigmonkk you are my sunshine my only sunshine.”