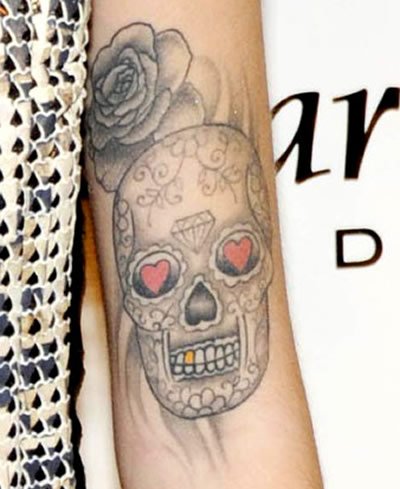 In July 2011, Cher Lloyd joined the likes of Miley Cyrus and Chris Brown and added a Mexican sugar skull tattoo to her increasing collection of ink. Cher Lloyd’s tattoo of the Mexican sugar skull is inked on the inside of her upper left arm, just above her empty birdcage tattoo, and features a pretty large skull with a rose blossom inked above and behind it. The skull in Cher’s arm tattoo is pretty intricately designed, with a diamond in the center of its forehead, flowers inked all over, two bright red hearts for eyes and a single gold tooth. Sugar skulls are becoming more and more popular as tattoo designs, and many people accompany their skull tattoos with one or more roses – a universal symbol of love, peace and honor, or a tribute to a loved one lost.

While some people get skull tattoos as a symbol of death or something dark or morbid, the Mexican sugar skull tattoo has a similar but far more positive meaning. The image of the sugar skull is commonly used as a decoration during the Mexican holiday called Dia de los Muertos – or the Day of the Dead – a celebration among family and friends who gather together to pray for and remember loved ones who have passed away. Rather than traditional skulls, which are typically black and white and a little creepy looking, Mexican sugar skulls feature ornate, brightly colored and often beautiful designs, which make them popular images to use in tattoos. Based on the traditional meaning of Day of the Dead skulls, one might think that Cher Lloyd’s sugar skull tattoo was inked in memory of a loved one – possibly her late uncle “Boo.” However, according to Cher, “[The skull tattoo] was from my first album in the UK. We picked the skull design because it’s a bit hard and edgy. I think it’s cool.”