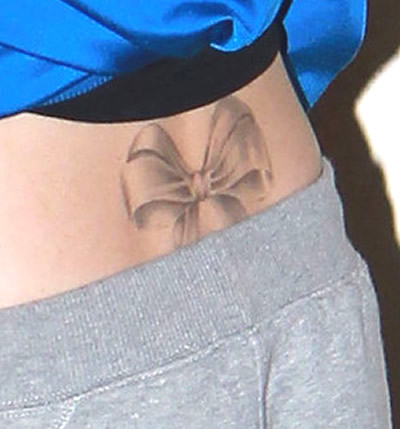 One of Cher Lloyd’s first tattoos was the large bow she has inked in the center of her lower back – an image that almost matches the tiny bow tattoo the singer has inked on her finger. Although Cher hasn’t said much about her bow tattoo in public, we’re guessing she got the ink as a symbol of femininity, like Pink’s bow tattoos on the backs of her legs. Cher’s back tattoo is inked in black and white, and the singer added the image to her tattoo collection before she was even legal! That’s right; many of Cher Lloyd’s tattoos were inked before she turned 18, including the large bow/ribbon tat on her back, and to hear her tell it, Cher’s parents had no problem with their underage daughter getting inked. In fact, Cher’s mother is the one who took her to the tattoo artist to get the treble clef tattooed on her hand on her 16th birthday, during a lunch break from high school, and the Cher Lloyd tattoos obsession began right there. Since that time, Cher has added more than a dozen tattoos to her collection, and she doesn’t plan on stopping anytime soon. “I just want to be covered,” the British singer says about her addiction to getting inked. “I don’t think I’ll regret any of them.”