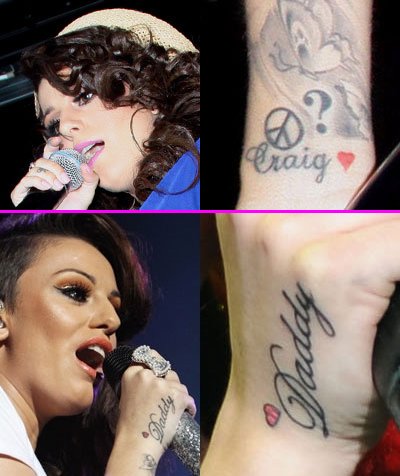 Cher Lloyd is a self-professed tattoo addict and has been collecting tats since she was 16 – two years before she was even legally allowed to get inked in the UK. Although most Cher Lloyd tattoos incorporate a wide variety of themes – from music-inspired tats to symbols of the obstacles she had overcome in her life – many of the pop star’s tattoos are tributes to people that she loves, including the “Daddy” and “Craig” tattoos she has inked on her hand and wrist. If you’re wondering who Cher Lloyd holds close to her heart, all you have to do is check out the name tattoos she has!

In March 2011, just one week after revealing the songbird and birdcage tattoos the singer had inked in memory of her late uncle, Cher added yet another tattoo to her growing collection – the word “Daddy” with a small heart on the outside of her hand. The “Daddy” in Cher’s hand tattoo is inked in black cursive, and there is a small black and red heart (similar to the heart tattoo Cher has inked on her finger) to the left of the letter D. Cher Lloyd’s tattoo is inked on her right hand, which means it is clearly visible when she holds a microphone – a fact that we’re guessing Simon Cowell, who signed Cher to his Syco label, isn’t too pleased about. Speaking previously about Simon’s dislike of her extensive ink, Cher said, “Even though Simon doesn’t approve of tattoos, the thing is I’m my own person and think it’d be cool to get another one.” Even though technically, Cher Lloyd’s “Daddy” tattoo goes against her own claim that she would never get tattoos on the outsides of her arms because it’s not “feminine,” we think it’s a pretty sweet tat!

More than a year after honoring her father with a hand tattoo, Cher Lloyd hit the tattoo shop yet again and added fiancé Craig Monk’s name to her tat collection. Being the good fiancé that he is, Craig returned the favor and got his own tribute tat on his arm – the name “Cher” in a matching font. Cher’s “Craig” tattoo is inked on the inside of her right wrist, below the singer’s peace sign and question mark tattoos, and it kind of blends in with the partial sleeve the singer has going on on her right arm. Like her “Daddy” tattoo, Cher’s “Craig” tattoo is inked in black cursive and the design also includes a small red heart – which is a recurring symbol in her tattoos. Cher Lloyd’s wrist tattoo was inked in May 2012, four months after the couple became engaged, and is one of many tats the pop star has inked as a tribute to her future husband.