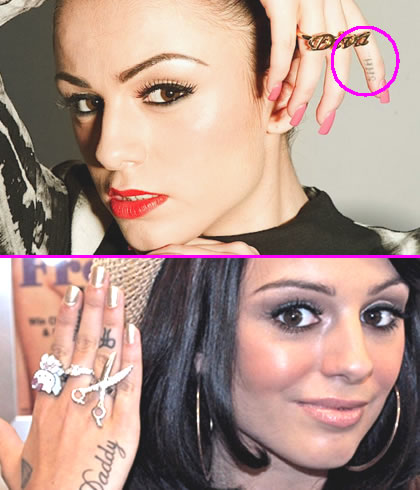 The finger tattoo was first made famous by the always fashionable Rihanna, and has since been embraced by other inked-up pop stars like Miley Cyrus (who has gone a little overboard with the whole finger tattoo thing, if you ask us) and Cher Lloyd (who only has a few finger tats…so far). In the exact same spot as Rihanna’s “Shhh…” finger tattoo, British singer Cher Lloyd has a small black tattoo that also reads “SHH…” on the outside of her right-hand index finger. The only difference is – Rihanna’s finger tat is inked in script and is written the right way, while the Cher Lloyd tattoo is inked in capital letters and is backwards for some reason. Because she holds her microphone with her right hand, Cher Lloyd’s finger tattoo is pretty much always visible, and so is the small bow tattoo the singer has inked on the outside of the ring finger on her right hand.

You don’t have to put much thought into the meaning behind Cher Lloyd’s “SHH…” finger tattoo. Like Rihanna – and Lindsay Lohan and Lily Allen, who also copied RiRi’s finger tattoo – Cher probably got the ink as a cute way to shush someone without having to say a word. As for the tiny black bow tattoo on her finger, which is pretty darn cute if you ask us, the tat was inked in March 2011, at the same time as the small red heart tattoo Cher sports on the ring finger of her left hand as a tribute to future husband Craig Monk. It’s possible that the singer’s bow tattoo also has something to do with Craig, or maybe it’s meant to represent a string tied around her finger as a symbol of something she never wants to forget. Perhaps her late uncle, Edward “Boo Boo” Smith, who tragically passed away in September 2010? Cher’s bow finger tattoo was also inked at the same time as the birdcage and songbird tribute tattoos the singer dedicated to Boo Boo.