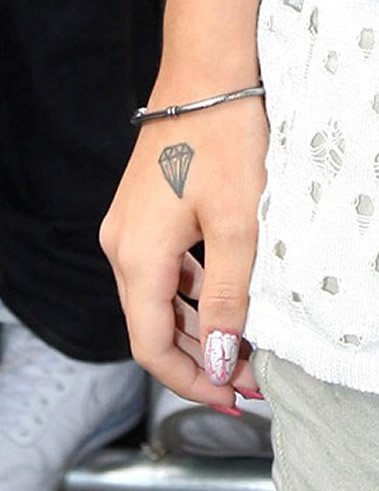 We all know that Cher Lloyd loves heart tats, but the singer appears to have an affinity for diamond tattoos as well. In addition to the diamond inked in the center of the forehead on her sugar skull arm tattoo, Cher also has a red diamond playing card suit inked on the back of her wrist and a medium-sized diamond inked in black and grey on the outside of her right hand. Cher’s diamond hand tattoo is located between her thumb and wrist and was inked in January 2011, around the same time as the question mark tat on her wrist and the Tracy Chapman lyrics tattoo on her arm. Cher Lloyd’s tattoo was first revealed as the singer, who was only 17 at the time, walked through a London airport on January 8, when the paparazzi snapped a photo of the diamond tat and the arm tattoo that reads “All that you have is your soul.”

After finishing fourth on the seventh season of the UK’s X Factor, Cher Lloyd said, “The first thing I’m going to do is get a new tattoo.” Although the pop star only planned to get the Tracy Chapman lyrics tattoo inked on her arm, she ended up getting the diamond hand tattoo as well, which is said to represent her success on the X Factor. The day before she revealed the diamond and lyrics tattoos, Cher teased her fans – who call themselves Brats – with a little hint, tweeting: “Just got new ink :)” with no picture to accompany the message. Cher’s X Factor-inspired hand tattoo must have been an especially hard pill to swallow for Simon, who signed Cher to his Syco label and apparently doesn’t approve of all the tattoos Cher has accumulated in recent years. “Even though Simon doesn’t approve of tattoos the thing is I’m my own person and think it’d be cool to get another one.” You go girl!