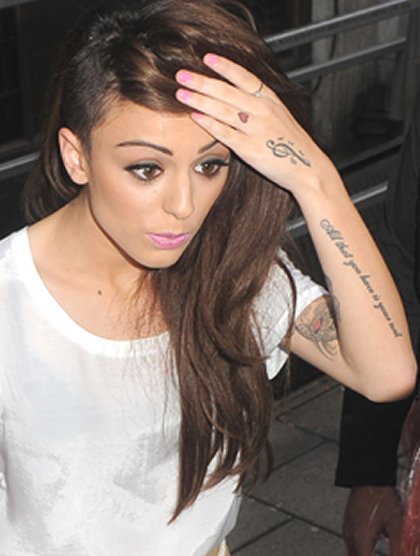 On her 16th birthday, pop star Cher Lloyd decided she was going to get her first tattoo – the treble clef and music notes tat the pop star sports on the outside of her left hand. This Cher Lloyd tattoo features a large black treble clef that begins near her left wrist and extends almost to her fingers on the outside of her hand. The treble clef is surrounded by four tiny music notes, also inked in black. “I was 15 when I wanted my first tattoo, and then on my 16th birthday I went and got a tattoo,” says Cher about getting inked for the first time. “I was actually at school and had a lunch break so my mom took me to get a tattoo at a local artist’s house and then I went straight back.” That’s some serious parental support right there!

Cher Lloyd first broke onto the music scene after appearing on the seventh season of the U.K.’s X Factor competition, and the singer’s treble clef tattoo is frequently compared to the Maori tribal tat Cher’s X Factor mentor and idol Cheryl Cole has inked on the outside of her right hand. “I admire her fashion, her looks and I even have a tattoo of a musical note like hers on my hand,” Cher has said about hers and Cheryl’s similar hand tattoos. While most people hate having their unique tattoos compared to others, Cher Lloyd is absolutely thrilled to be called a Cheryl Cole look-alike. “It’s funny when people say I look like her – we’re different, but I’ll take it as a compliment.”

Although her mom obviously supported Cher’s decision to get a tattoo, the artist who inked the treble clef apparently hinted that she was making a mistake. “At the time I still hadn’t been on [X Factor] and the tattoo artist said to me that people wouldn’t employ me because I had a tattoo on my hand.” That comment definitely didn’t deter Cher and hasn’t stopped the pop star from adding 20+ more tattoos to her collection since. “I had this crazy thought in my head that I wasn’t going to do anything but be a performer anyway.” The same year that she got her treble clef tattoo on her hand, Cher went on to finish in fourth place on the U.K.’s X Factor, and her debut album Sticks + Stones reached number four on the U.K. charts as well. Looks like Cher’s music-inspired tattoo wasn’t for naught!