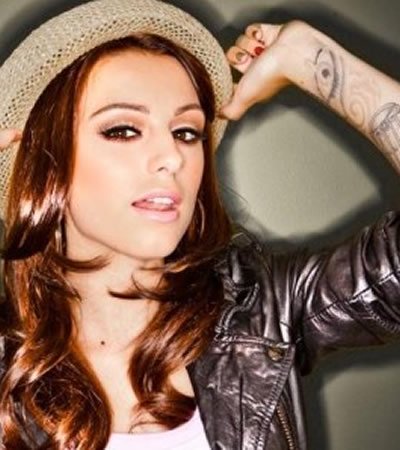 Directly below the birdcage tattoo on her left forearm, pop star Cher Lloyd sports a large tattoo of a crying eye on the inside of her left wrist. The wrist tattoo is inked in black and white and features a very realistic-looking eye crying a single tear, with a swirl above that fills the space between the eye and the birdcage. As Cher adds additional wrist and arm tattoos to her collection, the singer will be well on her way to having full sleeves on the insides of her left and right arms. According to Cher, she definitely plans on getting full sleeves, although she says, “Not on this part [the back of her arms] though, because that’s like not feminine. On the insides, not the outsides.” With an impressive collection of tats so far, Cher is not the least bit worried about regretting her ink in the future. “I really cannot stand some people when they say to me, ‘Oh it’s going to look horrible when you’re 60.’ Who cares? Then it’s going to be like a piece of artwork that people can look at and see all the crazy things I did in my life. It’s expressing me.”

During a 2012 interview with In House, Cher Lloyd talked about the meaning behind the unique crying eye tattoo on her wrist. “This one’s quite depressing. This is a crying eye for all the sadness and poo that I’ve been through already at the age of 18. And trust me, it’s been crazy,” the singer explained. “Like learning the strange things about life, when people pass away. You have to adapt to things that you’ve never been through before.” During another interview, Cher Lloyd commented on the same tattoo, saying, “It’s a crying eye. It’s for all the sadness and misery, but I’m happy now. I’ve cried enough tears, I can’t cry no more!” Probably one of the saddest experiences of Cher’s life so far was when her 34-year-old uncle Edward “Boo” Smith passed away from an accidental methadone overdose in September 2010. Cher Lloyd’s tattoo came after her late uncle’s death and was probably at least partly influenced by her loss.