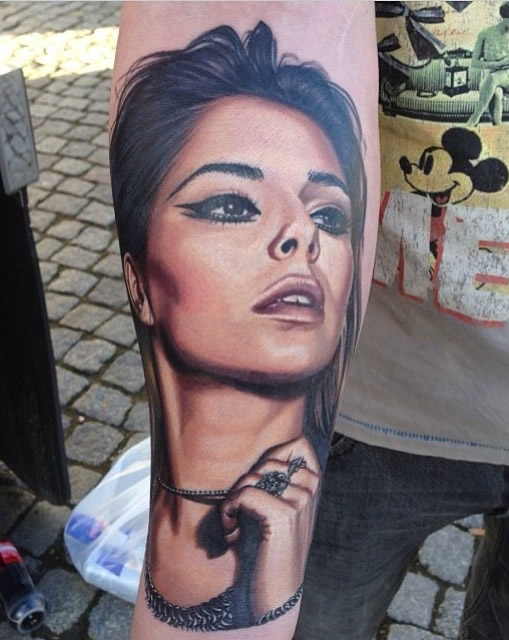 We’ve seen our fair share of pop star portrait tattoos – most of them awful – but a die-hard Cheryl Cole fan recently debuted a pretty awesome portrait tat that had the X Factor judge singing his praises on Instagram! On January 14, 2014, Cheryl re-posted a picture of the fan’s tribute tattoo to her Instagram followers, writing: “WOW!! @d_brandmo @nikkohurtado I am speechless this is unbelievable! I’m blown away.. I am so happy to live on your arm I hope I bring you happiness and love. I’m so flattered!!” Obviously, the Cheryl Cole tattoo was inked by Nikko Hurtado, tattoo artist to the stars, who is responsible for a number of other impressive portrait tats, including The Game’s tattoo of Nelson Mandela and Drake’s tattoo of his family portrait on his back.

The tattoo of Cheryl Cole is inked on the inside of the super fan’s arm, and depicts the sexy singer looking off into the distance with lips parted, smokey eye makeup and a sultry look on her face. Cheryl’s hair in the tattoo is blown back in her signature style, and you can also see one of her bejeweled hands grasping a thin necklace around her neck. We have to admit that, nine times out of ten, we end up slamming celebrity portrait tattoos because they look nothing like the people they are dedicated to, and because, who wants to have to look at a horrible tattoo of someone you don’t even know for the rest of your life? In this case though, we approve of the fan tat because it looks exactly like Cheryl Cole and she looks pretty darn hot in ink!

Plenty of female pop stars have been immortalized in fan tattoos, including Demi Lovato, Rihanna and Lady Gaga, but few of them ever end up looking exactly like the subject. In fact, most of them turn out so terrible that we end up feeling embarrassed for the person who has to walk around with the tattoo in plain sight for everyone to see. (Remember the creepy tattoo of Demi with abnormally small hands?). We always assumed the overwhelming existence of bad portrait tattoos was because it’s just too damn hard to perfectly capture with a tattoo gun the tiny little nuances and expressions in the face that make a portrait tattoo actually resemble a real person. Now we now that all those other portrait tattoos were just inked by inexperienced or untalented artists, because this Cheryl Cole tattoo done by Nikko Hurtado gets an A++ in our book!