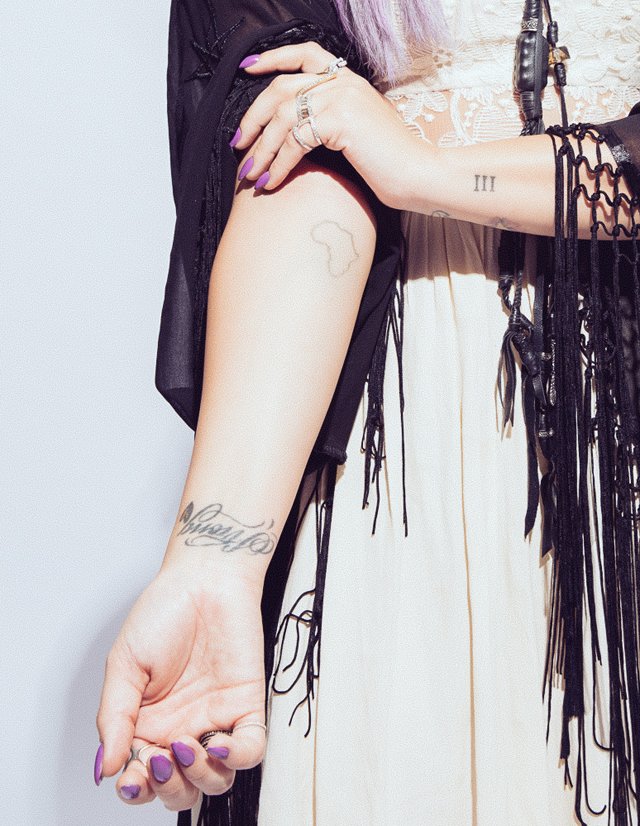 Demi Lovato recently sat down for an interview with iHeartRadio, where she explained the meaning behind her most recent tattoos, including the outline of Africa tat she has inked on the inside of her right forearm. Tattoo number 14 for Demi Lovato was inspired by a mission trip she took to Kenya last year, but apparently the pop star didn’t think people would recognize the shape of Kenya, so she opted for an Africa tattoo instead, to commemorate what she referred to as a “very inspirational journey.” Demi Lovato’s tattoo is located on the inside of her right forearm, just below the inside of her elbow, and features a very simple outline of the African continent inked in black.

The last time we checked in with Demi Lovato’s tattoos, she had gotten the Roman numeral III inked on her wrist in honor of her father, who passed away from cancer in the summer of 2013, but she apparently got another tattoo during the same session – an outline of Africa on her arm. Demi’s Africa tattoo was apparently inked in late 2013, and while she chose to reveal her Roman numeral tattoo during an interview on The Late Late Show with Craig Ferguson on December 10, the inked-up singer decided to keep her African tattoo under wraps, for the time being at least.

It wasn’t until Demi spilled the beans during her iHeartRadio interview on July 2, 2014 that we got the inside scoop behind the pop star’s cool outline of Africa tattoo. “The last tattoo that I got was two at the same time – which is kind of how I like to do it,” Demi revealed during the interview. “I went there for my 21st birthday. I went to Kenya and it was just a very, very inspirational journey that I feel like really had a huge impact on my life. And, I would’ve gotten Kenya but then people would have been like, ‘What’s that?’ So Africa’s a little more distinct.”

Unlike most soon-to-be-legal people out there, Demi Lovato celebrated her 21st birthday last August with a mission trip to Africa, where she volunteered on behalf of Me to We’s partner, Free The Children, in the Maasai Mara region of Kenya. The singer and X-Factor judge spent her time in Kenya visiting different communities with some of her friends and helped build a new school through the Free The Children charity. Obviously the people of Kenya appreciated Demi’s hard work, because they generously gifted her a goat for her birthday! We have a feeling Demi holds her trip to Africa pretty close to her heart, and now she has a permanent reminder of it on her arm!