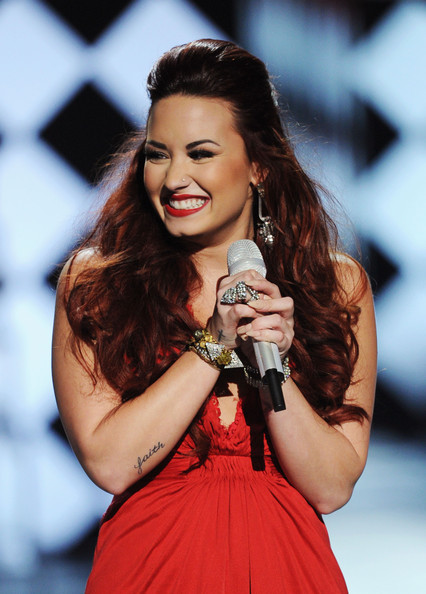 Demi Lovato added to her growing tattoo collection in 2011 with a simple cursive tattoo that reads “faith.” Demi’s faith tattoo is inked in black on her right forearm and apparently matches a tattoo that a friend she met in rehab also has. Although Demi Lovato’s arm tattoo obviously speaks to her Christian faith, she has other reasons for relying on faith in her life. Read on to find out more about the young singer’s arm tattoo and its important meaning.

Demi Lovato’s tattoo was inked in December 2011, and simply reads “faith” across the outside of her right forearm, just below her elbow. Demi’s faith tat is simple and elegant, and is inked in a black, lower-case scrolling script on her arm. The young singer clearly has a lot of faith, and she has said she hopes to use her struggles and experiences to help others who have suffered from similar issues in their lives. According to Demi, who was bullied as a child, she wants to work with other kids to let them know, “I’ve been through it and I came out a stronger person.” According to the superstar, “scars are like battle wounds – beautiful in a way. They show what you’ve been through and how strong you are for coming out of it.” After struggling with bulimia and cutting for years, which left a number of jagged scars on her wrists, Demi Lovato has finally put a more positive mark on her body – her faith tattoo.

The Meaning of Demi’s Faith Tattoo

“It’s a matching tattoo with one of my friends [Lauren Martin] that I met in treatment,” Demi says about the meaning of her faith tat. Demi is a devout Christian and it’s not hard to imagine that at least a little bit of faith is what it took to help her get through rehab. “I went through 14 hours of therapy every day,” Demi reveals. “It wasn’t fun. There were sessions from seven in the morning until nine at night: Alcoholics Anonymous, Narcotics Anonymous, Anorexics and Bulimics Anonymous and Self-Mutilators Anonymous. It was constant emotional work and exhausting.” So, a little less than a year after the songstress finished rehab, she celebrated with her arm tattoo, and she is hoping to pass that unwavering faith on to others. 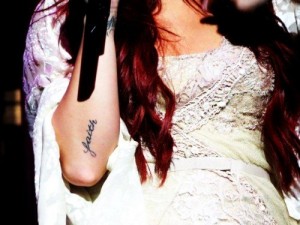 During the filming of her MTV documentary “Stay Strong,” Demi visited the Illinois-based treatment center to share her story and words of encouragement with patients there.

After checking out of the rehab facility in early 2011, Demi Lovato tweeted “Guess who’s baaaaaack…..!!!” followed by this inspirational quote: “Achievement comes to those who are willing to walk as far as it takes till you get to what few have.” 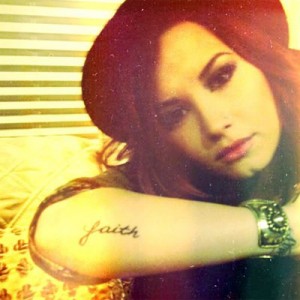 Demi’s religious beliefs have influenced a number of her other tattoos besides her faith tat, including her “you make me beautiful” ink on her side and the cross she has tattooed on her hand. Demi’s faith tattoo may have more to do with faith in herself than her relationship with God though. “I didn’t think I was going to come out of treatment with a new best friend, but I did and obviously I believe in faith. Faith has gotten me where I am today.” Are there more Demi Lovato tattoos in store for the future, fans want to know? “I have to stop,” Demi laughs. “I’m going to be covered in tattoos!” Don’t worry, we have faith she’ll get more!